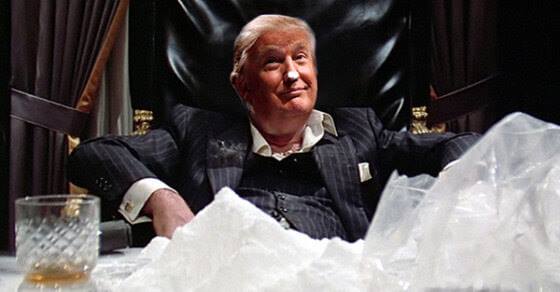 Well he is a rich businessman who was big in the 80s.

Yesterday marked the first Presidential debate between the two worst candidates to ever vie for the American presidency, Hillary Clinton and Donald Trump. And it was an absolute shit show as expected.

Both candidates had their fair share of dumb one liners – although obviously Donald Trump was the winner in these – but it was mostly characterised by both of them interrupting each other and cutting each other off and generally acting like babies. Trump definitely came off the worse though, but anyone with a brain probably knew that before it even kicked off.

One part of the debate that was particularly unusual though was the fact that Donald Trump kept sniffing all the way through it, much like a person who had just done a load of blow before you spoke to them. This is probably best illustrated in the supercut of the debate made below by Deadspin:

And then truly nailed by American politician Howard Dean, who unsuccessfully ran for the Democratic ticket in 2004. Can’t believe he actually said this so fair play to him, but look how many favourites and retweets he’s got since then so I guess he knew what he was doing:

So is Donald Trump a coke user? I mean, he’s a rich white businessman who was big in the 80s, so chances are that he has used coke before but I have no idea whether he used it before the debate or not because he acts like this all the time in public. Maybe he’s doing it before every television appearance, but they don’t normally last for 90 minutes so nobody has been able to tell yet. Who knows?

As for the debate, I think Hillary came off slightly better but the opinion polls are all over the place. Both of them are liars and idiots so I guess we’ll just have to wait to see which is the least bad come November 8th. If you need any more reasons why Trump is an asshole though, watch the video below: