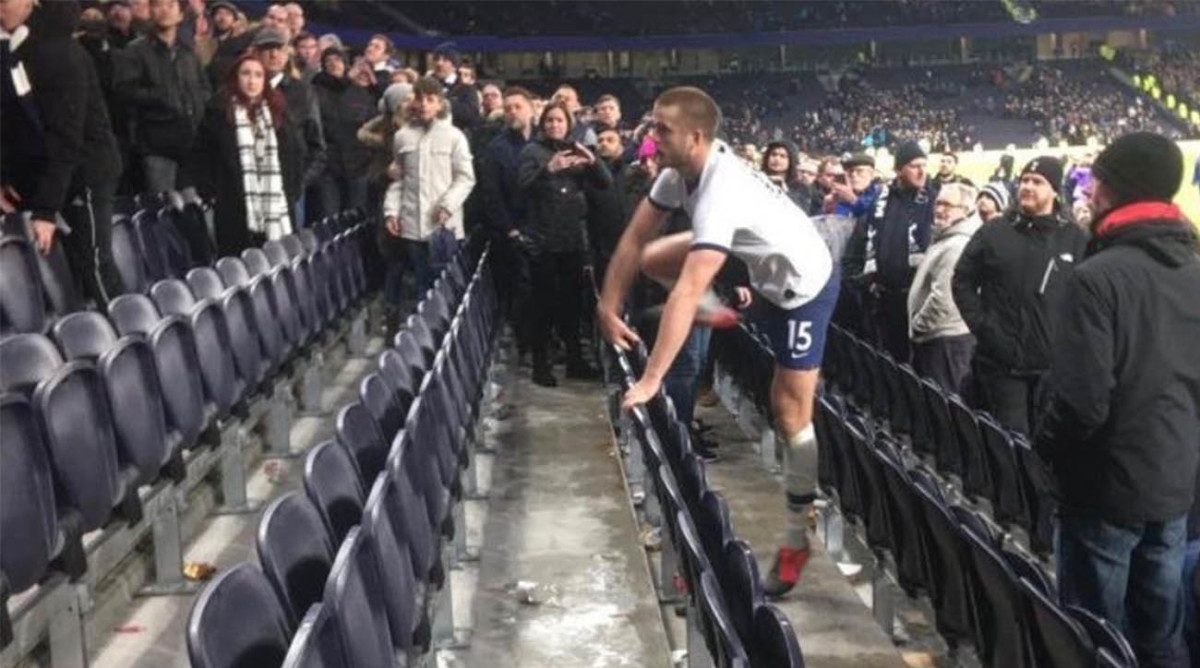 Anyone who isn’t a Spurs fan will have looked on and laughed at the club last night after they went out on penalties to lowly Norwich at their own ground, meaning they’re pretty much almost certainly not going to win anything this season or even come in the top four, despite hiring Jose Mourinho a few months ago for exactly this purpose. You love to see it.

Well, you love to see it if you’re not a Spurs player or directly related to one of them as we saw one of the most bizarre incidents in modern football going down after the game as Tottenham midfielder Eric Dier climbed into the crowd to confront a fan. We’re not entirely sure what was being said by the fan, but there are rumours that he was either racially abusing Gedson Fernandes – who missed the decisive penalty in the shootout – or that he was starting something with Eric Dier’s brother.

Either way, it was enough to see Dier climb about twenty rows of the stadium to get in his face and shout at him, which is something I don’t think we’ve seen a professional footballer do since Eric Cantona’s kung fu kick almost thirty years ago. Absolutely mad scenes – here are a few of the best versions of it on Twitter:

Imagine eric dier played 120 mins and still did a whole leg day by hurdling over the seats to back the ting😂😂 new favourite player#TOTNOR pic.twitter.com/NG0dT6MTU7

Also the ginger lad in a blue coat giving you a hug is me, x pic.twitter.com/Mo1XM7vlpp

#ericdier just hurdled some seats next to me in what I thought was going to be a warm embrace / shirt giveaway but apparently he came to punch a fan for racist abuse on Gedson Fernandes. Well done to him! pic.twitter.com/JxvaSgExex

Chaos at our club currently – on and off the pitch #THFC pic.twitter.com/CDtWkyykBk

What an absolute madness. Honestly can’t see these scenes going down under Pochettino and I think they really are indicative of how the club has descended into chaos since Mourinho’s appointment.

Obviously we don’t know the full story of why Diet jumped into the crowd and if it was because of racial abuse or someone picking on his brother then he should probably be commended as it’s what most regular people would do in the street or wherever. Unfortunately you can’t really set a precedent like that for professional athletes confronting anyone in the crowd who hurls abuse at them so I imagine instead he’ll probably be fined and suspended for a bunch of games, screwing up Spurs’ season even more. When it rains, it pours.

For more of the same, check out this Aston Villa fan challenging Joleon Lescott to a fight after relegation comments. Not quite the same.