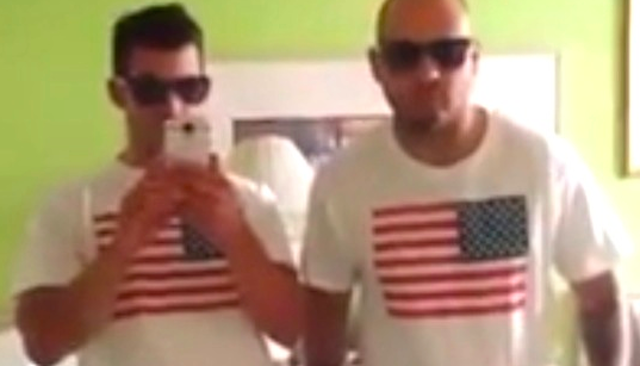 I’m not sure if these guys have ever met any Americans because they do NOT dress like this.

I recently headed over to Salvador for the World Cup, and was surprised when my buddy Slatz was wearing Billabong shorts as they aren’t exactly cool and they’re not exactly the kind of thing he would wear. When I asked him about it, he said that he had looked up on the internet what young lads were wearing in Salvador and read that they were wearing Billabong. Being Slatz, he then immediately went and bought a pair of Billabong shorts as he wanted to try and blend in with the ‘young lads’ in Salvador.

At the time, I thought this was completely weird and probably an isolated incident and that nobody else in their right mind would do something like that. It turns out I was wrong though, as these two idiots from Colburn (where?) have proved with this ridiculous video in which they get ready for a day out in LA by dressing up like idiots in the most ‘American’ outfits they can find i.e. a t shirt with the US flag on it and US flag style shorts. To be fair to them though, it’s not as bad an idea as some of America’s worst ideas ever.

The chemistry between the two of these guys in the video is great and it’s probably worth watching for that alone. Hopefully they’ll upload a few more videos from their holiday in the coming days.