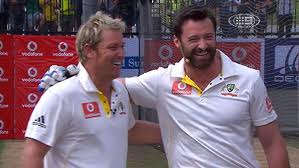 One of them gets hit in the nuts with a cricket ball!

I guess if you’re into cricket or vaguely patriotic (I am neither) then you would have been staying up late for the past few weeks watching the Ashes and will be completely buzzing right now as England managed to retain them. That’s great. What was probably infinitely more entertaining than the entire series though and took about one millionth of the time was this video clip of Wolverine – in his civilian identity of Hugh Jackman – getting hit in the balls with a cricket ball bowled by none other than Shane Warne during some kind of celebrity match at one of the games. Has Jackman been tweeting Liz Hurley or something?

Bizarrely, this event has also inspired some American girl to upload a video of her face talking about it. Weird: