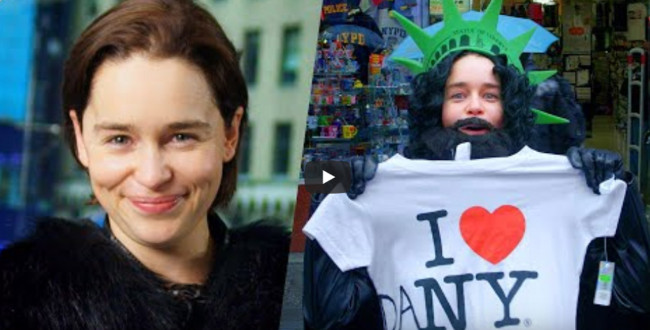 Nobody knew it was her.

I think everyone is in agreement that when you see a cosplayer walking around the city, you desperately look the other way so that they don’t engage with you. Unless maybe you’re a bit wasted then you get a picture with them and start talking to them and immediately regret it.

Anyway, if you saw someone dressed up as Jon Snow walking around Times Square because you happened to be in New York, it’s very doubtful that you would have gone up to them and talked to them. But you would be kicking yourself when you saw the video below, because the cosplayer was actually Emilia Clark! OMG!

Emilia was doing this to promote a competition for her new charity SameYou, which is raising awareness about brain aneurysms as Clarke recently revealed that she almost died from one during filming for the first series of Game Of Thrones. The prize is pretty dope as well – the winner and three friends will fly out to London to meet Clarke and get to watch the finale of Game Of Thrones with her, as well as taking part in some weird photoshoot using a load of props.

I guess that might be fun, but the real prize here is just hanging out with her for the last episode I guess. The video of her hanging around Times Square as Jon Snow was actually surprisingly funny as well, definitely worth a watch if you’ve got a few minutes:

Can’t believe how many times I actually laughed during that, looks like Clarke has got some great comic timing as well as acting chops. Maybe we’ll see her doing comedy before long?

Anyway, for more Game Of Thrones, here’s the 25 best Arya Stark memes after that last fantastic episode. What a badass.