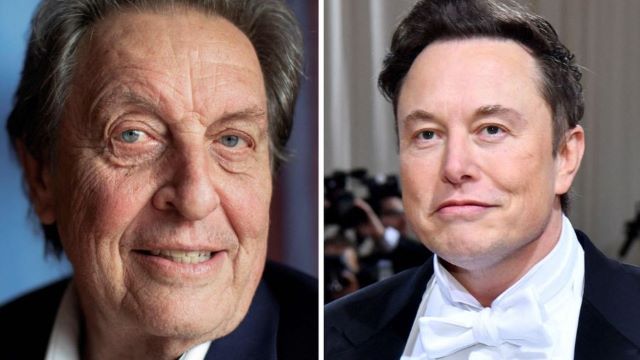 Elon Musk’s father Errol has given a brutal interview on Australian radio, taking several swipes at his 50-year-old billionaire son.

76-year-old Errol, who has seven children including two with his stepdaughter from a second marriage (yes, two kids with his own stepdaughter) spoke with KIIS FM’s Kyle and Jackie O in a bizarre 20-minute interview, in which he wasn’t exactly complimentary of his son…

When asked if he was proud of his son, Errol straight up said “No”, then elaborated:

“Well you know I mean we are a family that have been doing a lot of things for a long time it’s not as though we suddenly started doing something so we’ve all been you know as a family all doing things, you know, you know from the very beginning,”

He even suggested that Elon was an underachiever – WTF?

“Elon is not as happy as he’d like to be, he’d like to be where he is now uh he would have liked to have been there five years ago oh really so he feels that.”

Bloody hell. If Elon Musk’s dad can’t be proud of a son who’s worth $270 Billion, then what hope do the rest of us have of making our parents happy? Honestly reading this interview has ruined my whole summer. If Elon Musk is such a loser in his dad’s eyes, then what does that make the rest of us?

Then again, it could be that Errol Musk is insanely jealous of his son’s success and that’s why he won’t give him any credit. If I were him I would just STFU and go mooch off my billionaire son and spend the rest of my days chilling on a yacht in paradise somewhere, not badmouth my son on Australian radio FFS. Although I suppose this is a guy who had two kids with his own stepdaughter so you can’t exactly expect him to think like a sane person. Chin up, Elon!

For news on Elon Musk’s transgender daughter applying to change her name, click HERE. She’s not a fan of Elon either.