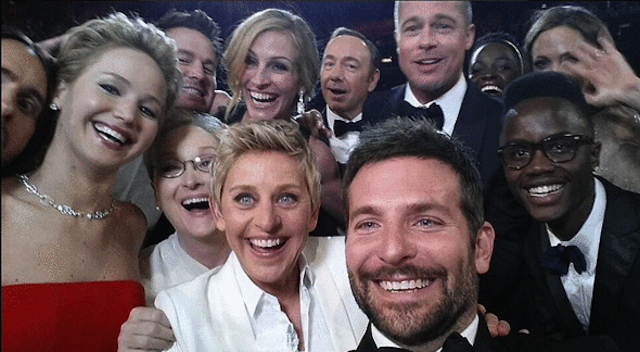 You probably heard that Hollywood had a little awards ceremony last night called the Oscars, and you’ve probably seen Ellen Degneres’ selfie picture that she took with a bunch of other celebrities – including Jared Leto, Bradley Cooper, Brad Pitt and Jennifer Lawrence – blowing up all over your social networks today as it’s pretty much been bigger news than the actual ceremony itself.

It’s such big news that it’s actually smashed the record for retweets and is now officially the most retweeted tweet of all time. Wow, what an honour. The previous record belonged to Barack Obama’s ‘Four more years’ tweet that he sent out when he was re-elected, but this only had a paltry 800,000 retweets.

At the time of writing, Ellen’s tweet had about 2.5 million retweets and the activity of the tweet was so out of control that it also managed to shut down Twitter briefly last night as the servers just couldn’t handle what was going on. Wow.

If only Bradley’s arm was longer. Best photo ever. #oscars pic.twitter.com/C9U5NOtGap