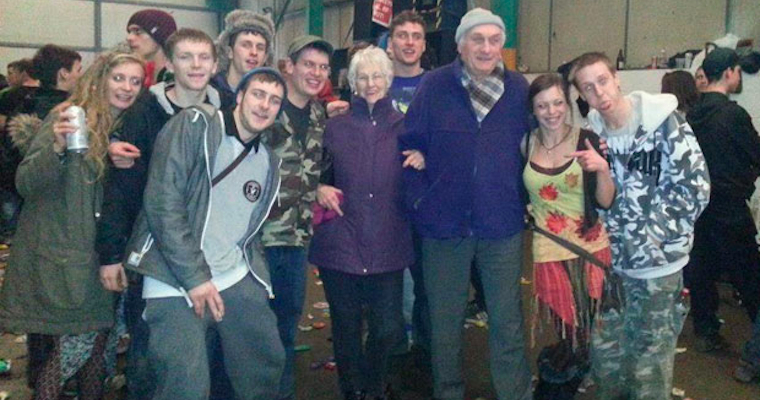 If you’re a couple of OAPs looking for a jumble sale the last thing you probably want to do is wind up at an illegal rave.

This is a pretty cool story and the pictures are pretty jokes too. In March, Cambridgeshire on New Year’s Eve there was a massive illegal rave in a warehouse which I guess is something you would probably expect from a boring city on New Year’s Eve as all the wreckheads aren’t going to head into the local Oceana or whatever and there’s no venues where you can party all night long so you gotta just break into a warehouse and set up your own party. PUNX. Anyway, they got a little bit more than they bargained for when at about 10am on New Year’s Day as the party was  (allegedly) winding down when two OAP’s wandered into the warehouse looking for a jumble sale.

Can you imagine anything more jokes than a couple of olds turning up to a rave when you’re gurning your face off and still dancing around at 9am? It’s great when anyone turns up at a rave/party at 9am to keep it going, but if it was a couple of OAP’s I think everyone would completely lose their shit. I mean look at that picture at the top of the article. That’s some people having a good time right there for sure.

The olds – who were called Dick and Lil Dickens stumbled across the rave when they were looking for a jumble sale. Here’s what Dick had to say about the whole thing:

‘We had been out shopping and we saw all these cars outside. There was no music or anything like that. The cars were parked all over the place. We thought it was a sale. I don’t think we were the only ones as there were several people wandering over to see what was going on.We had a look in and that was it. When we realised that it wasn’t a sale we left. We’re in our 80s so we don’t want to get mixed up in anything like that.’

Yeah dude, I guess if there are a lot of cars parked around somewhere then it definitely means that there might be a jumble sale going on there?! I hope my brain doesn’t devolve to that level of logic when I’m that old. If I even make it to that age, which I kinda hope that I don’t, especially if I think like that. It’s also kinda worrying that all these people drove to the rave and were allegedly doing ‘ecstasy, coke and laughing gas’ (no shit, I guess the balloons on the floor didn’t give it away) and then hoping to drive home afterwards. I mean it’s not the late 80’s/early 90’s anymore, is it, surely people are a bit more sensible than to get completely screwed up and then drive home? I would like to think so but I guess not, although it is a rural area and I guess stuff like that gets a bit more leeway out there. But still.

Apparently the rave caused 50K worth of damage to the warehouse and the police knew about it but decided that trying to shut it down would be more trouble than it was worth because so many people were there. AKA they just wanted to enjoy their New Year’s Eve. Instead they have now set up a project called Operation Silwood in order to find out who planned the rave and prosecute them in order to ‘bring them to justice’  which sounds a bit dramatic but I mean it’s probably more important than solving murders or breaking up paedophile rings or whatever else the police could be spending their time looking into. If a couple of OAP’s can have a blast at an illegal rave why can’t the police just let them keep happening? Spoilsports.