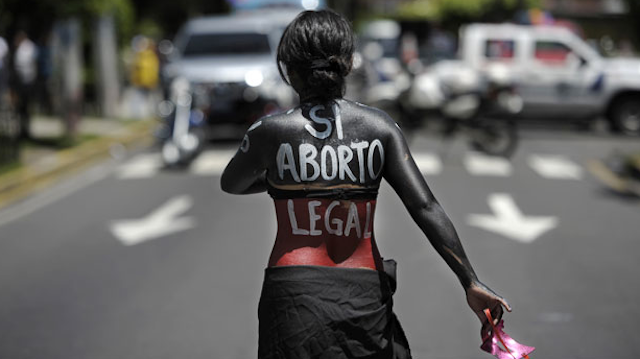 In El Salvador, women who have miscarriages can be charged with murder. Is it any wonder then that half of suicides among 10-19 year old girls in the country are carried out by pregnant females?

El Salvadorian women who have miscarriages are being accused of doing so intentionally and are being thrown into prison for breaking the country’s strict anti-abortion laws by “murdering” their babies.

El Salvador is one of only 5 countries in the world with an outright ban on abortion.

In 2004, 18-year-old Cristina Quintanilla felt an immense pain in her stomach while she was pregnant with her second child. She passed out and when she woke up, she was handcuffed to a hospital bed and being interrogated by police as to how her miscarriage came about. In the end she was charged with manslaughter and sentenced to 30 years in prison.

Quintanilla’s sentence was eventually reduced to 3 years, but that was still 3 years too many — away from her first son and the rest of her family. There are countless other El Salvadorian women who are going through the same thing — jailed for being unable to complete a pregnancy through no fault of their own.

“The medical reports couldn’t explain why the baby died, but the prosecutor made me out to be a criminal who could have saved my baby even though I had passed out in pain”, said Quintanilla.

According to the World Health Organisation, suicide is the leading cause of death among 10-19 year-old girls in El Salvador — half of whom were pregnant. Not even girls impregnated by rape are allowed to consider abortion.

Many criticise El Salvador’s dated and punishing abortion laws, but with it being a largely conservative country teeming with pro-life groups, it may be a long while before change is even considered.

â˜› More Prison: A Sickening Glimpse Into The Sadistic World Of Chinese Prisons