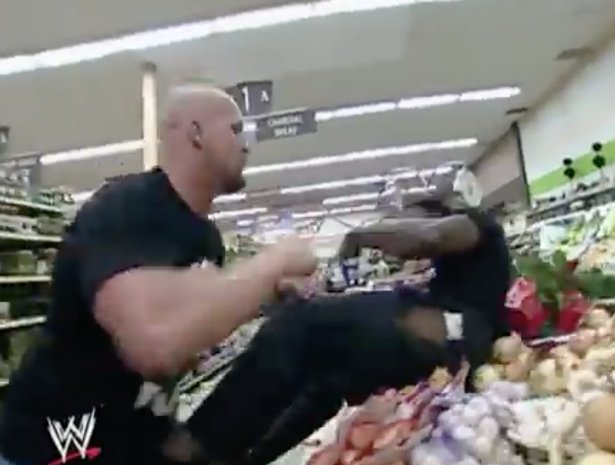 Everyone in the country is slightly worried about the connotations of the lockdown at the moment, with the main concern being that food might run out and that we’ll literally be beating the shit out of each other in the supermarket soon for the last tin of baked beans.

A lot of people have seen the funny side of this – you have to really – and a couple have posted up a video of Stone Cold Steve Austin and Booker T fighting in a supermarket from ages ago in the WWE and likened it to the scenes that could be coming to a Sainsbury’s near you in the very near future. Most people realised this was a joke and had a little lol about it with their friends, but unfortunately there are a whole bunch of idiots out there who thought it was real and one of them was ex Tory MP Edwina Currie.

She took to Twitter to condemn the behaviour and then was obviously completely and utterly rinsed by the public afterwards for it, which was possibly even more funny than the original video being shared. Here’s a look at some of the best disses:

You sure this isn’t staged? Nobody else around, no security staff, and whoever is filming is managing to get all the angles https://t.co/RpqDxIUZOv

Absolutely shocking Edwina. The same thing happened in my local post office between a guy who looked like an undertaker and a guy with a bandana and pants on! #COVIDー19

This was in a hospital in texas. Patient was recovering from covid19 aswell. pic.twitter.com/qVl1f353ga

No Edwina, this is the same man proudly wasting milk after the assault!! pic.twitter.com/B7s05ZhmIa

It’s got the WWF logo in the corner, so I think we can take it that it’s for banter.

No, this isn’t Booker T and Stone Cold in an iconic segment on an episode of Smackdown in 2001, this is in ASDA today

Of course it’s not staged. Why would two blokes in the same t shirts and wearing protective knee pads not beat each other up in a an empty supermarket with pulled punches?

It’s ok, they got him. pic.twitter.com/s1WdblK7bn

I bet John Major got all the angles too eh Edwina? #dirtyticket

The fight spilt out onto the street too. Terrible pic.twitter.com/xvA7mZx4C4

Lol that John Major line was a good one wasn’t it? It’s also so great how there are so many dumb WWE GIFs that you can use for literally any situation here.

Really funny as well how boomers just know nothing about stuff like WWE even though anyone with any modicum of knowledge of popular culture would have recognised the logo and the fact that it was Stone Cold Steve Austin in the fight. They just don’t have a clue.