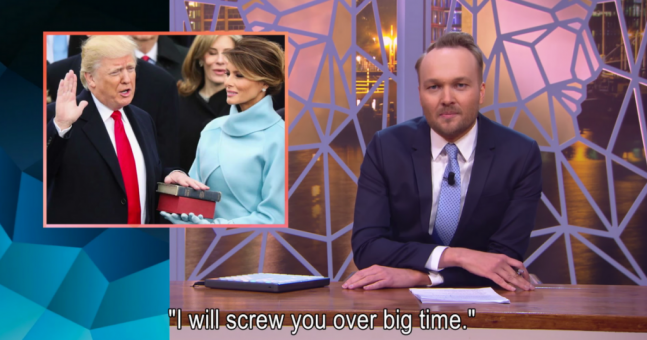 A+ trolling from our friends in The Netherlands.

One of the key messages of Donald Trump’s inauguration speech was that America was going to come first under his reign as President and he more than rammed this home during his twenty minute monologue.

Thankfully – for Trump at least – the idea seems to have filtered through to all the other nations in the world and has best been exemplified by this promo video compiled by some Dutch satire show. In it, they recognise that America is going to come first in this new global society but ask Trump nicely if The Netherlands can please come second.

So far so good, but the real hilarity comes in the way that they’ve chosen to present this information, only speaking in the kind of ridiculous rhetoric that Trump uses during every single one of his speeches. This is so spot on it hurts:

Wow. Way to sum up Donald Trump and his ridiculous verbal tirades eh? These guys knocked it out of the ballpark and it’s no wonder that this video is going viral all over the world. I’m sure Trump will be on his Twitter account soon enough calling it Fake News and trying to undermine its impact though, so enjoy it whilst you can. Really is something special.

For more satire involving Donald Trump you only really need to look at the man himself, check out some of the dumb shit he’s been getting up to right here. You literally couldn’t make it up.