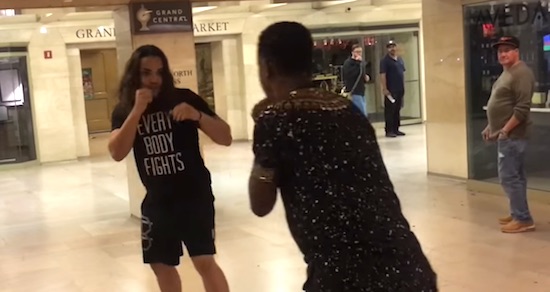 It’s probably a fair assumption to think that people that wear t-shirts with slogans on like ‘Everybody Fights’ probably aren’t that good at fighting, but if you’re gonna test them then you had better make sure that you know what you’re doing as well.

Unfortunately for the guy in this video, being spun off drugs at 6am probably isn’t the best time to be starting on a guy who knows how to fight when you’ve got absolutely no clue how to attack or defend yourself. The protagonist in this video was stumbling around Grand Central Station in New York on Thursday morning when he thought it would be a good idea to start on a guy who looked hard as nails wearing a t-shirt with the immortal slogan discussed above on it.

To say it didn’t turn out well for him would be an understatement:

Guy got owned. Other than the fight though, there are a couple of great things about that video that you’ve gotta point out.

Firstly, the fact that the guy who’s videoing it literally followed the pair around in between altercations hoping that it would start up again. That’s some dedication.

Secondly, the commentary towards the end of the video. ‘I guess you guys are going to booking’ has to be one of the lamest lines I’ve ever heard, and the way it’s delivered in that drone nerd voice is just the icing on the cake. Some people.

For more knockouts, check out this redneck getting KOed. Beautiful.