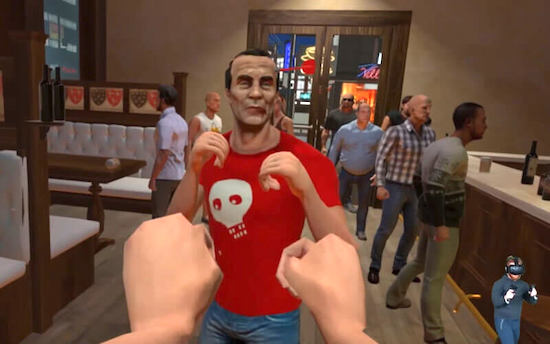 You literally beat people up in a bar – and it looks like quite the workout.

The limits of virtual reality gaming continue to be tested and by far and away the best game that I’ve seen so far is this offering simply entitled ‘Drunken Bar Fight’.

The concept is pretty simple and is pretty much given away in the title – you’re a drunk guy in a bar and you have to fight everyone in there to get out. This being virtual reality though, you’re not simply button bashing to take part in the fight, but actually throwing punches and ducking and weaving like you’re in a legit drunken bar fight, only without the pain usually involved in such an incident.

In the video below you can check out some guy called Buddy taking part in the game and looking like he’s having a completely sick time:

Yeah, looks like quite the workout eh? Not really sure if there’s much longevity to the game or if it’s even possible to complete it – do you just go to another bar and start another fight after you clear out the first? – but it looks like loads of fun and would be a completely dope way to spend a Saturday afternoon. Definitely thinking about investing.