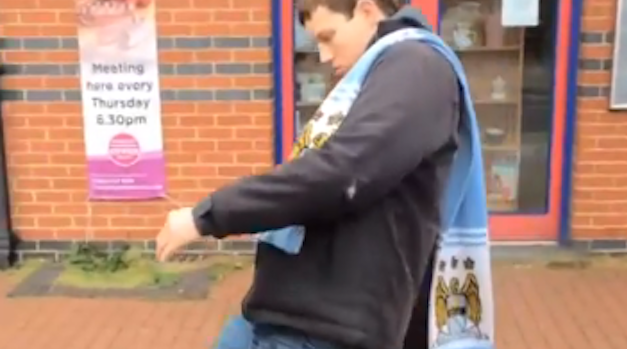 As the title race took another turn over the weekend, one Manchester City fan took his celebrations to the next level.

The title race took another twist over the weekend with Liverpool losing to Chelsea and Man City beating Crystal Palace which now firmly establishes them as favourites for the title.

With that in mind, it’s not surprising that Manchester City fans were celebrating profusely yesterday, although maybe none were celebrating as hard as this guy who had allegedly been drinking since 9am and was desperately trying to stay upright as he walked back through London after the Crystal Palace game.

I’ve seen videos of drunk guys stumbling around before and this admittedly isn’t the best ever, but it’s just fascinating how he’s hunched over walking (kinda like the backwards man, or someone with a broken back or something) in his attempts to stay upright. He probably won’t even remember the game, that’s if he even managed to make it all the way back to Manchester on his own.