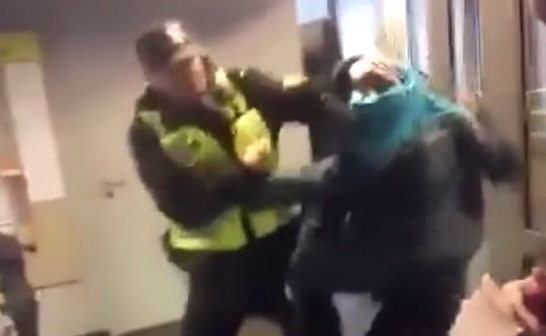 Most of the time it’s pretty ill advised to go up against a cop in a fist fight, because you’re probably not going to have any training and it’s literally one of their many jobs to subdue rowdy people for whatever reason, but people still do it time and time again and end up getting their clocks cleaned.

Not this time though. In the clip below that was taken in Riga, Latvia, a policeman has come over to a local boarding school where he’s been asked to secure the door.

He’s suddenly accosted by a gang of youths who start filming him, before he attempts to detain one of them grabbing him in a headlock. Unfortunately for the cop, the 15 year old – who was allegedly drunk at the time of the incident – manages to wriggle out of it and then slam him four times in the head, sending him down for the count where he continues to savage him even further:

Yeowch that does not look good, especially that last savage kick right in the face. The policeman was apparently taken to hospital and is OK now, but the drunk kid was arrested and charged with attacking a government official.

If/when he’s found guilty, he’s gonna face up to five years in prison. Looks tough in this video sure, but not sure how tough he’s gonna be when he’s rocking up to a Latvian prison.

For more of the same (kinda), here’s an NYPD brutally beating up a kid for no real reason. Pretty harrowing stuff.