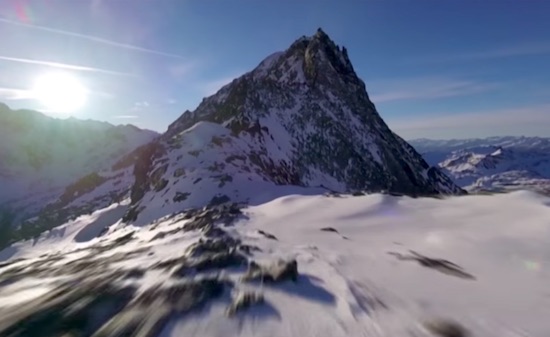 Switzerland is one of the most beautiful countries in the world, but much of it is impossible to check out yourself as it consists of craggy mountains that nobody is ever going to be able to get up to check out.

Thankfully in 2017 though, you can head up there via a drone and that’s exactly what this video showcases. Even though it’s pretty high risk for the dude filming this to send his racing drone up there as it could potentially fall out of range or get smashed up, he sent it up there nonetheless and created some of the most breathtaking video we’ve ever seen.

The footage captures the snow covered mountain tops of the country as the drone speeds high above them, in a scene very reminiscent from the opening of The Two Towers. You kind of expect the dude to turn back after the first 20 seconds, but it turns out his drone has a range of around 10km so he just keeps going and flying pretty close to the mountains that you think he’s gonna smash his drone up.

The video also features the music from the James Bond film Spectre, so you’re half expecting Daniel Craig to turn up wearing a wing suit or something, but thankfully it just sticks to the beauty of the mountains:

Absolutely awe inspiring. Great to catch a glimpse of the natural wonder of the Earth right there.

For more awesome drone footage, check out this amazing footage of a volcano erupting in Iceland. Out there.