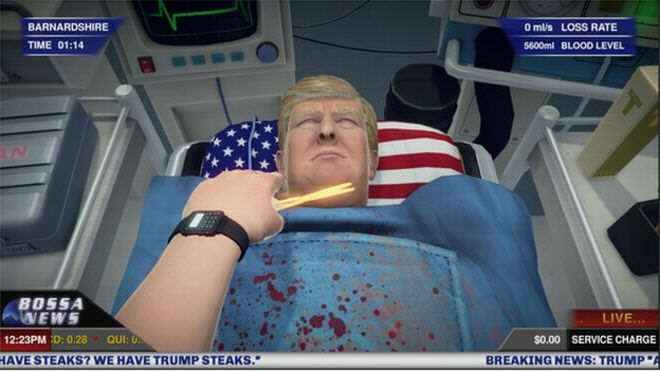 Giving the people what they want.

I’m sure that most people reading this are probably just as pissed off with Donald Trump as we are and terrified that he might actually be the President of the United States by the end of the year, and there isn’t really anything that any of us can do about it.

There is one way you can possibly make yourself feel slightly better about the situation though and that’s to place this new game that has just dropped which lets you rip out his heart. It’s an update of the old ‘surgeon simulator’ where the guy getting the surgery has been turned into Donald Trump.

The actual objective of the game is to successfully perform heart surgery on him, but obviously very few people are actually going to want to do that and would probably rather rip his heart out instead. In addition to this, the controls are actually super complicated and hard so it’s really difficult to sort it out anyway. Boo hoo.

Here’s a trailer to the game, which doesn’t really show you that much about the gameplay unfortunately:

Yeah I really wanted to see the blood and guts there, not a bunch of celebrities talking about Trump. The game is available now though so that’s something that’s positive if you want to download it on Steam. Apparently (at the time of writing), around 5000 surgeries have been successful but 18,000 have let Trump die on the operating table. Seems about right.

If you still aren’t convinced that Donald Trump is an absolute idiot, check out our video below: