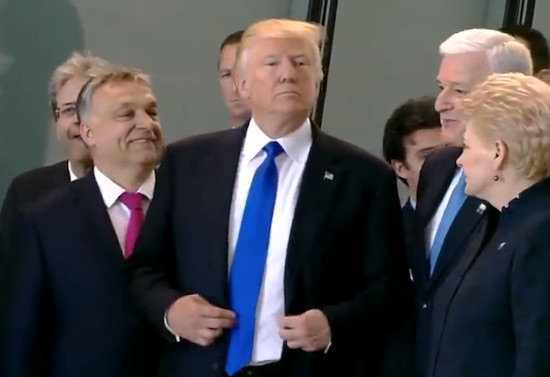 He does what he wants.

Say what you want about Donald Trump, one thing is for sure: the guy does what he wants, when he wants. You know, like grabbing them right in the pussy.

He was at it once again the other day when he was was visiting NATO headquarters. Determined to be recognised as the alpha male of the group, Trump made no qualms about literally pushing the Prime Minister of Montenegro Dusko Markovic out of his way so he could stand at the front of the group of leaders and pose like a badass:

Slo-mo: Trump appears to push aside/shove another NATO leader to get to the front of the group. pic.twitter.com/K0OC6QnEL4

Ugh. I suppose you’ve got to begrudgingly respect someone who literally doesn’t give a fuck about anyone else and just wants to win all the time. Very begrudgingly though.

Not sure what Markovic made of it all, but I doubt Montenegro could do anything about it even if they wanted to. That’s real power from Trump I guess, and he knows it. Asshole.

For more Donald Trump being an asshole, how long have you got? Click here.