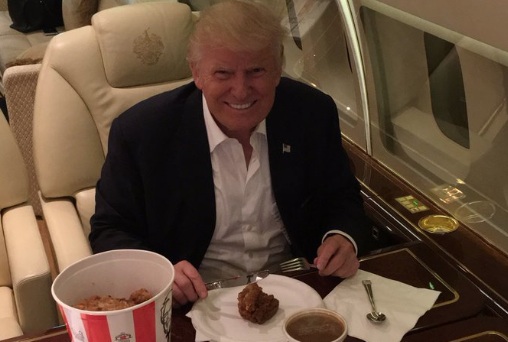 It seems in the last couple of years there have been a hell of a lot of examples of politicians not knowing how to eat fast food properly, and it turns out that Donald Trump is also one of these weird freaks. Who would have thought huh?

Oh man it’s just so wrong. I mean I get the fact that you tweet stuff like this to prove that politicians are just like the people they’re supposed to represent, but man at least get a shot of him tucking into it like a real man and not some bourgeois billionaire. Ridiculous.

I suppose Cameron did win the election, but was that really the key to his victory? It’s a sad omen for America if it is, but hey, at least we can look at what’s happened to Cameron since and hope that that might happen to Trump too when he gets elected.

The world is fucked basically. Watch this video if you don’t believe us yet: