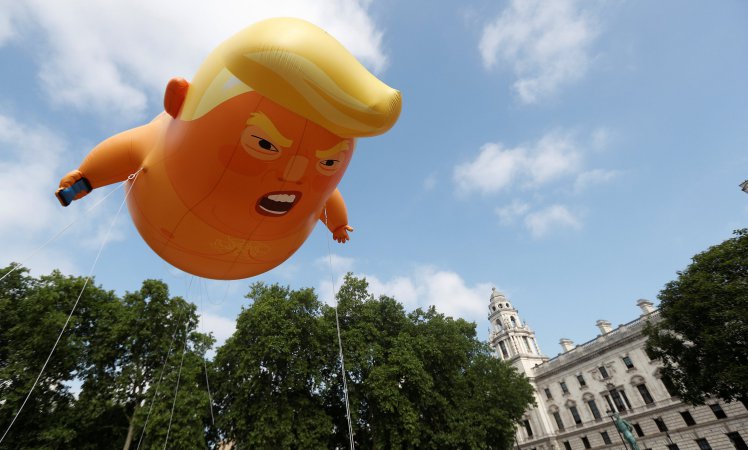 In the buildup to Donald Trump’s UK visit this weekend, there was a lot of talk of people crowdfunding a massive giant baby blimp to fly over the capital as he walked around doing whatever it is that he’s doing.

There was a lot of support for this idea and it quickly reached its target, but there were still question marks about whether or not this was actually going to happen when it all came down to it. Fortunately though, today’s the day and we can confirm that there is a massive baby shaped blimp of Trump currently circling around London and it looks fantastic. Get a load of this:

Hot damn. To be honest I thought it was going to be way bigger but I guess it’s getting the point across and does look pretty hilarious. Just would be way better if it was about four times as big and flying way higher in the sky, that’s all. Can’t really complain though I guess.

Here’s what Matthew Butcher – one of the organisers of the protest – had to say about it all:

People see it and they know what it’s getting at. It’s bringing to light his infantile way of doing politics and the dangers behind his politics.

There’s a toddler-in-chief in charge at the White House and the real life effects of those politics is pretty devastating.

People are pleased to see some humour. We’re just one small part of one big movement in the UK.

Yeah, it does make perfect sense really doesn’t it? It’s probably going to go down in history as an iconic moment during his reign too with everyone going ‘oh yeah, remember that? That was toooooo funnny’ etc. Providing it doesn’t tip Trump over the edge and encourage him to start a nuclear war that is. Just sayin’.

For more of the same, check out this guy giving the finger to Trump’s motorcade. Tell it like it is pal.