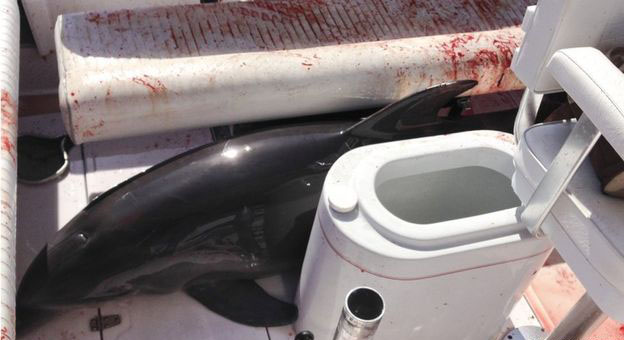 Dolphins and sharks are teaming up to reclaim the ocean.

As if having sharks attack humans wasn’t enough, now we’ve got to worry about dolphins too.

A family in California were out on their boat when a dolphin weighing around 350lbs jumped out of the water and landed in their boat. It smashed the daughter in the face with its flipper and then started trashing around the boat, breaking her mum’s ankles.

It hit my wife and knocked her over, and punched my daughter.

The dolphin busted its nose and split its tail during the carnage, which explains all the blood in the video below:

So was this just a freak accident or are dolphins/sharks/jelly fish/octopus etc teaming up to reclaim the ocean from humans? It was only ever a matter of time before they got sick of us riding boats into the water like we own the place and trying to kill and eat them all the time. And judging by the damage this dolphin inflicted it doesn’t look like they’re sending warning shots either — just straight into full on bloodbath mode.

Definitely keep your wits about you on the beach this summer.

P.S. I reckon it was this video of humans forcing a fish to smoke a cigarette that really sent them over the edge.