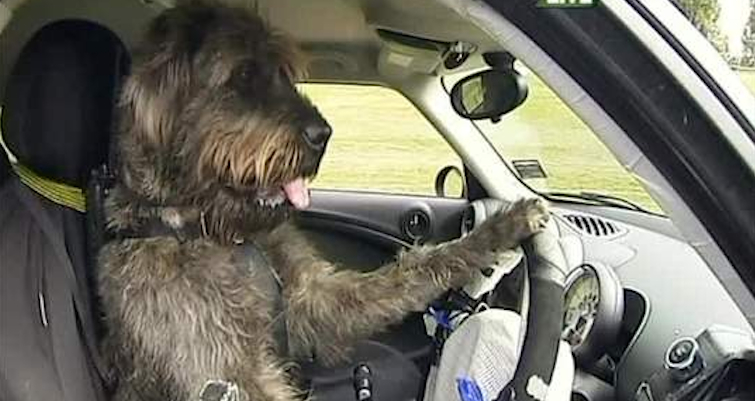 Everyone is sharing this clip so we had to get involved. I mean we never thought we would ever see dogs behind the wheel of a car, and I doubt we ever thought they would look as cool as this. Or as cute.

This is the most watched clip on the BBC right now and a couple of lame-os on my Facebook have shared it already saying how it is ‘the best thing ever’ and ‘omg so cute!!!!&@’ so I’m guessing a couple of you might have seen it already but it’s just so weird (and/or cute) that I figured it was worth talking about here on Sick Chirpse. It’s also pretty incredible that people are actually managing to teach dogs how to drive cars and kinda makes me question why it took me so long to pass my driving text. Probably because driving tests are bullshit, right? Nobody actually follows the rules of the road once they’ve passsed their test. I guess that probably explains why I have 6 points on my licence right now. But I mean come on, speeding on the motorway? That’s some bullshit right there.

Anyway over in New Zealand, there’s some pretty awesome footage of dogs driving cars going round. They hop into the car and just drive it along, changing gears and everything. They’re not going very fast but it’s still pretty fvcking dope seeing this dog literally driving a car, even if it is real slow. Unfortunately for the dog he’s driving a mini and not some sick Mercedes, but he IS only learning so maybe there’s a chance for an upgrade in the future and maybe we’ll even get a live action version of Rude Dog and the Dweebz. Don’t remember Rude Dog and the Dweebz? Rude Dog was basically this really cool dog who owned a garage and drove a Cadillac and adopted all these dweebs and tried to make them cool. Real cool show. Here’s a clip:

But yeah back to New Zealand. Why the hell are these people teaching dogs to drive cars? Is it not enough that robots have artificial intelligence now that we also have to teach animals  how to use technology so they can present a viable alternative as a threat that could rise up and overthrow us? I guess not. These dogs over in New Zealand have all been abandoned and the dudes at the animal shelter thought that if they could teach them to drive cars then it would highlight their worth more than if they weren’t doing anything and just walking around with their tails between their legs feeling sorry for themselves.  This does makes sense kinda, I mean you would definitely want to adopt a dog who could drive a car because that would mean HE could walk YOU instead of the other way round. Kind of. But then the whole point of a dog is to play around with it and take it for walks right I think? A dog driving a car  might be real cool/cute but it’s ultimately a useless skill to have, and I doubt these new potential owners are going to spend hours upon hours upon hours teaching their new dogs new skills as they have jobs and stuff to do and probably just wanna play with the dog and go for a walk with it when they get home.

But maybe I should stop thinking about the reasonings behind it and just enjoy the fact that dogs are driving cars. It’s really cute and really cool. Most people are sharing the BBC clip but here’s a couple more reports on it from CNN and some other American company. The second one is probably the best because it has two American news anchors talking about it who are really, really stupid. Then it cuts to an English clip which is probably the best of the lot as it details the training methods involved in getting the dogs up to speed i.e. getting used to the gear stick, steering, go karts etc. There are gonna be some LIVE TESTS on Monday to demonstrate just how sick these dogs are, so stay tuned for them.

â˜› More: Woman Breastfeeds Her Dogs But Not Her Children