On the open ocean, far from home, a storm approaches. 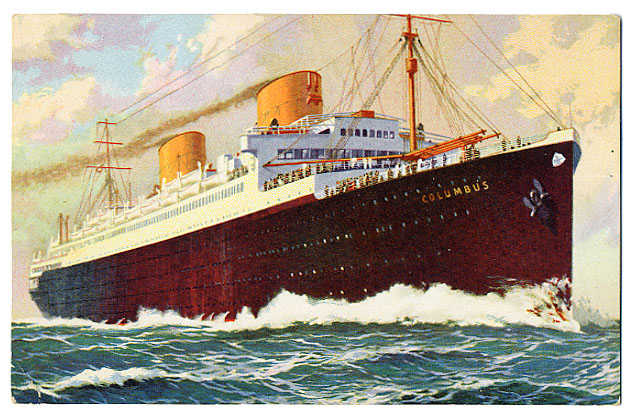 It was the noise that drew me in most of all- the explosion of sound as the waves, burning a deep orange hue in the gathering dusk, reared themselves up like great enraged lions and came crashing down upon the side of the ocean liner with untamed ferocity. The shock wave rippled through the metal, through the soles of my black leather shoes and into my feet causing my entire body to tingle with something between fear and awe. The constant whoosh as the mighty ship cut through the sea, parting smaller waves in its wake, gliding continuously onwards towards it’s destination in defiance of nature’s raw power provided a fitting backdrop to these wild and intermittent rushes of sound. I pulled on the ends of my shirt sleeves, the white cotton grubby from the dirt rubbing off the railing at the liner’s edge onto my hands, attempting to create a barrier between my arms and the increasingly biting wind, but it was to no avail. Goosebumps began forming on parts of my body, peppering my skin with odd little pockets of lumps. I shivered. Whether this was to do with the wind, or the demonstration of the sea’s power, it was difficult to say. Grabbing hold of the rusting rail, flecks of paint crackling and breaking off under my touch, flaking into the air and somersaulting in the wind into the unknown, I leaned out over the side and breathed in sharply, allowing the salt breeze to fill my lungs. A sudden gust caught hold of my curled, blond hair and tossed it from side to side, large clumps of it obscuring my vision, singular strands finding shelter inside my mouth. Even my own hair tasted of the sea. Using one hand I gathered it to the top of my scalp and firmly held it there. Looking out over the waves undulating and crashing below, forming, living and dying in a matter of seconds right before my eyes I had the sudden urge to let go of the rail and allow the wind to carry me wherever it wished: up into the sky above to soar majestically with the birds, or down below into the billowing water, to be smashed against the side of the ship and crushed beneath one mammoth swell after another. I, or anyone else, would be powerless to stop it. The thought made me smile. Gathering saliva into my mouth I pursed my lips, made a gargling noise in the depths of my throat and spat into the ocean. In less than a second my meagre contribution to the vast expanse of water had been swept behind by wind, lost to the wilds forever.

“Oh for heavens sake Charlie, grow up.” My father sighed from behind me. I could imagine his exasperated face, the thumb and index finger rising to rub his temples in disdain. I swung my body safely back within the deck, turned my face towards him and grinned. He attempted to look displeased for a few moments longer before giving up and smirking out from under his regal snow white moustache. He wore, as always, his full black suit with starched white shirt underneath and a long black tie that almost hit his belt buckle. I had left my jacket in our cabin, much to his displeasure. My sister and I joked that he would sleep in the damn thing if our mother would let him.

“The boy has too much freedom and not enough responsibility. He still behaves like a child at sixteen. Our father would not have accepted that kind of behaviour from us.” My uncle moved from the edge of the boat to where he had also been standing looking out over the vast ocean and glided over to where my father stood. He fixed a stern stare upon me, the kind of stare he had given me ever since I was old enough to remember, and no matter how much I tried to summon a manly courage and meet his gaze, I always turned away first, partly from anger, partly from embarrassment. No one could affect me the way he could, not even my own parents. I turned away again as I could feel my face beginning to burn, and looking down into the sea attempted to pour my instant, childish temper into it, but no matter how much I concentrated to force it out of me the feeling continued to keep hold.

“Changed times Peter, changed times!” my father proclaimed, and I heard a dull thud which I assumed was him slapping his brother on the back. “We had too much responsibility when we were younger, far too much. It wasn’t our parent’s fault, we were poor, if we didn’t work then there would have been no food to feed us at night. We’re not hand to mouth any more though. Business is booming, and this new contract will make us an international company. Can you imagine? You and I, at the helm of a global business! More money than either of us ever dreamed of, growing up in that little house in the city, and it’s all for them, the children. So they can have a better life than I ever had, an incredible life, that’s free of worry and stress and everything that made the pair of us old goats adults before our time.”

I heard my uncle sigh, and probably shake his head from side to side in tiny motions in that ever disapproving manner of his. “I still don’t think it’s right. Children should be taught the value of things, the value of food and goods, so they don’t grow up taking your wealth for granted. You’ll turn them into louts and slackers George.”

My father laughed and I heard him move towards me from the claps of his leather shoes on the metal deck. He placed his hand on my shoulder, giving it a firm little squeeze, saying without words “He’s only trying to get a rise out of you. Don’t worry about it. Relax.” I turned again to face them both, and caught my fathers gaze long enough just for him to give me a conspiratorial wink. As if that motion was the key to my floodgate I felt all my anger wash out of me and dissolve in the wind. I raised my head high and gave my uncle a wide, beaming smile. His long, grey coat billowed in the wind like a monster flailing for it’s prey, giving him a demeanour of the macabre and something altogether other. It unnerved me even to look at him sometimes, his thin features jutting out in sharp points, the contours of his face almost aggressive compared to my father’s own plump, jovial head. He looked to the north, the direction in which the boat was travelling and nodded slowly, speaking in long and laboured breaths.

“We’d better get inside. There’s a storm coming.”

“There’s something we can agree on. Coming, Charles?”

I looked up at him and shook my head. “I’d like to stay out here, just for a little while. If that’s all right with you?”

“Of course it is,” he said, tousling the my hair as he walked towards the door to the ship’s interior, “just don’t stay out so long that it starts to rain. Your mother will be annoyed that you’ve got that shirt dirty already, it is new after all.”

With that the two men retreated within the ship, closing the metal door with a clang behind them. I walked up to the bow of the ship, feeling the surface loll backwards and forwards underfoot as the great vehicle surged towards it’s port of call. Ahead of us, as my uncle had said, was a storm unlike any I had ever seen when living in the city. What must have been only a few miles in front of us a massive, ominously black cloud, extending as far to either side as my vision would allow me to see, loomed high into the atmosphere. The way parts of the cloud tumbled over each other in a rapid fashion, as if some will within the mass itself drove it forward under it’s own power instead of that of the wind gave it the look of something organic. The air between the cloud and the sea was darker than that between the boat and the sky above it, the rain obscuring any vision. I stood alone, on the deck of the ship that attempted to defeat these two great forces of nature, the sea and the storm, and couldn’t help but feel a slight echo of fear deep in my stomach. Both these powers were so fierce, so incredible compared to the seemingly frail method of transport that we inhabited that I couldn’t see how it would survive this assault on both fronts. I calmed myself, knowing that our kind of journey had been completed hundreds of times previously under far greater strains than this. I stood watching the approaching storm, surrounded by the fierce power of nature, and stared at the rolling blanket of cloud, attempting to know its dark heart.