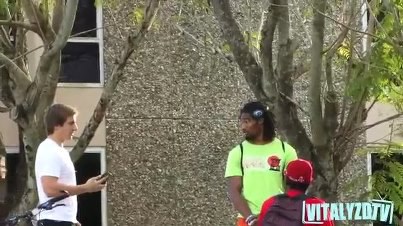 YouTube prankster Vitaly Zdorovetskiy confronts Miami meatheads about the (lack of) time they spend in the gym. Do you even lift bro?

You may recognise Vitaly Zdorovetskiy as the YouTube prankster who was arrested over the summer for his bomb hoax prank which as well as being tossed in the cells almost got him battered by his unamused target. Anyway, he’s still at it despite being on parole, routinely hitting on other people’s girlfriends, distressing homeless people and getting arrested… again.

Here is one of his more recent efforts which had us cracking up.  Vitaly is seen strolling around Miami with the sole intention of winding people up about their lack of build. Funny considering some of these guys look like they practically live in the gym. Vitaly works through a few targets before finally meeting his match at the end and proclaiming that he’s ‘pooed his pants’. Killed it bro.

â˜› Check These Pranks Out Next: