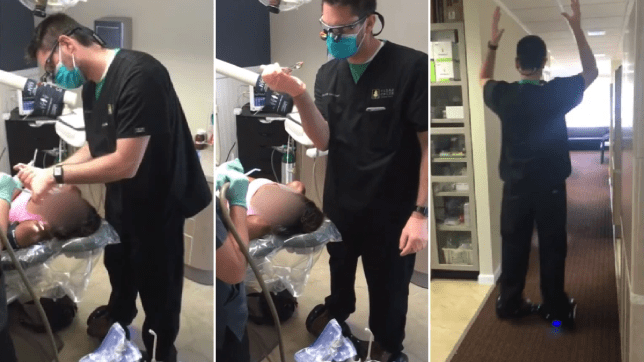 Justice has been done.

You may remember the story last year about the cockiest dentist ever who would carry out procedures on patients including tooth extraction while riding around on a hoverboard.

Here’s a clip/news report if you don’t remember:

When I first read about this story months ago I didn’t really see the big deal. A hip dentist riding around on a hoverboard is the sort of image overhaul that dentists could use more of considering most people think of them as sadistic pricks who just want to torture your mouth for half an hour on every visit.

Well it turns out there’s a little something called ‘professional standards’ which Seth Lookhart didn’t meet while he was riding around on his hoverboard extracting teeth, and instead committed what is known as ‘unlawful dental acts’. He would also text clips of himself performing dental surgery on his hoverboard to friends and family and crack jokes about it. So I guess he’s smart enough to graduate dental school but also dumb enough to do something that stupid and share the evidence.

According to CNN, Lookhart has now been convicted on 46 felony and misdemeanor counts in Anchorage Superior Court, with judge Michael Wolverton calling the evidence presented against him during his five-week trial “overwhelming”.

The best bit is you finally have a legit excuse to not to go to the dentist – clearly there are rogue lunatics out there riding around on hoverboards and yanking out teeth. Not to mention the dentist who would put his penis in patients’ mouths while they were under anaesthetic. Yikes!