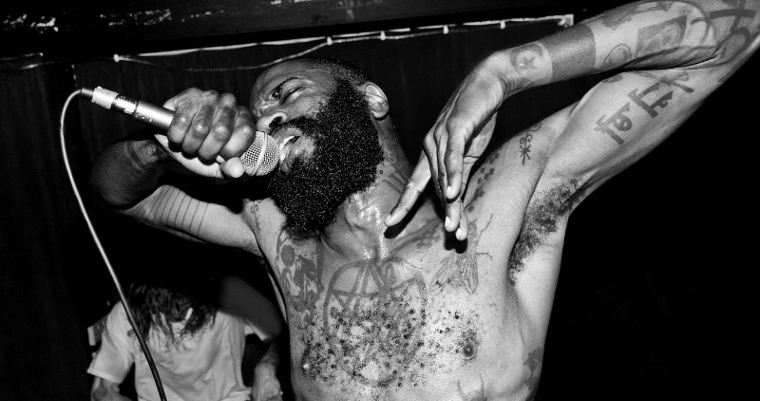 Death Grips release new album, label doesn’t like it and shuts down the band’s website. Band post free links to album, anyway. Not a fvck given.

I hardly ever write music-related stuff on here because 1) you’ve all probably got really shit taste and 2) I spend most of my (diminishing) spare time writing about music anyway and 3) we’re all too high by now so you’ve probably got your favourite jams on. I know I have.

But this time, I’ll make an exception and write about music because you need to know about this. It’s raw as fvck. If you find yourself trawling through the archives of Sick Chirpse a lot then you might have come across an article about the band Death Grips. If you haven’t, then all you need to know really is that the band are ill as fvck and their sound is as primal and as aggressive as a bunch of fat kids fighting over free McDonald’s and as intense as a Death Row stare.

They’ve been a favourite at Sick Chirpse for an age now and their mixtape, ExMilitary, is still burning like fvck from all the plays even though it got released over a year ago. Their debut album, The Money Store, is a class listen as well but that mixtape is (and maybe always will be) a personal favourite. You should check them out if you haven’t already.

Anyway, to cut a long story short, the band got signed to the major label, Epic, who had released The Money Store and were going to release the band’s next album, No Love Deep Web. But the label started being pussies and started pouting like little girls who weren’t allowed ice-cream when the band wanted to release the new album yesterday (October 1st). They didn’t want the album released then for some stupid bastard reason – they probably wanted to advertise it for more money – so Death Grips kicked them in the balls and went ahead and released the little beauty for free download on their website, anyway. They just don’t give a fvck at all. The band said that ‘The label wouldn’t confirm a release date for No Love Deep Web ’till next year sometime.’ So, who can blame them for releasing it themselves? The label didn’t like this at all, though, and have been childish as fvck and the band’s website has been shut down. All obvious fingers pointing to Epic. I guess that’s what you get for signing to a label owned by Sony, though. The fat cats don’t like it when they don’t get their own way, the cunts.

Death Grips have openly been posting links to download the album on their Twitter account so their label are probably crying with anger at the moment, but that’s their fault. I don’t care. The band don’t care. The NSFW artwork for the album is of a cock with No Love Deep Web written on it in marker pen and I suppose Death Grips have just told their (ex?) label to suck their cocks. Fitting.

You can stream No Love Deep Web here or check out the video below (before it gets taken down). You should listen to it now and see what all the fuss is about. You won’t regret it like that buzzard you shagged Saturday night.