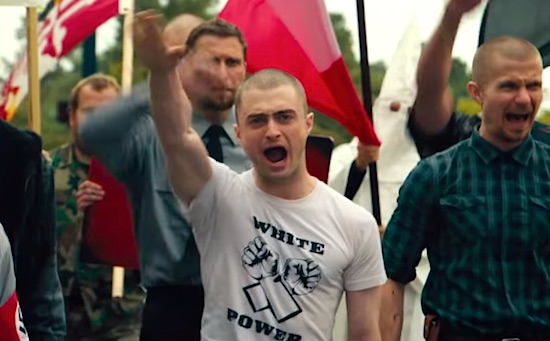 Whenever an actor plays a character for an incessant amount of time, they end up becoming synonymous with said character and can never really shake that impression of them from the public consciousness.

Daniel Radcliffe is probably someone who has more trouble with this than most, as the whole world watched him grow up playing that dorky wizard Harry Potter, and as such his film choices since then have attempted to be as far away from him as possible. He might have reached his peak in that respect with his latest release Imperium.

The movie tells the story of a young idealistic FBI agent who goes undercover with a white supremacist terrorist group in order to take them down. We can see where this is going:

Uh oh. Looks like that guy has old Dan pegged at the end of the trailer, although I’ve seen enough of these movies to know he probably just says something like ‘awww just playing fuck nuts with ya Nate’ afterwards but then you’re left thinking for another half an hour about whether he actually knows or not, the bastard. He always fucking knows as well.

So yeah, Imperium probably isn’t going to be anything overly original but it looks pretty intense and well done and should be worth a watch to see if Radcliffe can actually handle playing a role like this. Between this and that movie with him playing a farting corpse, maybe Radcliffe has finally shed that image of him as Harry Potter? Yeah, never gonna happen is it?