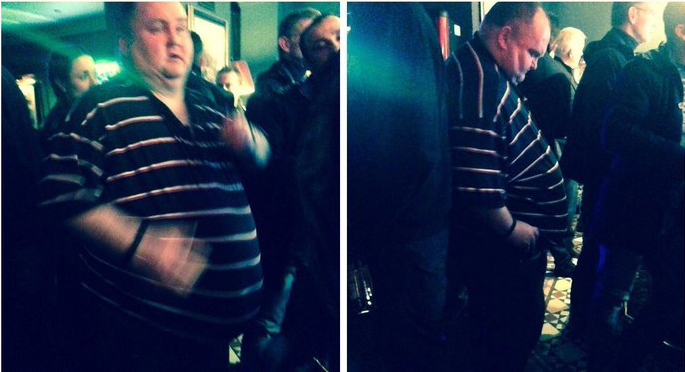 Proof that the Internet is a great place sometimes.

Just take a look at the featured image above. Isn’t that one of the saddest things you’ve ever seen? Wouldn’t you give anything to see the sad, deflated figure on the right transform back into the happy dancing figure on the left?

Sean from London was busting out some moves on a dancefloor somewhere when a group of pricks began laughing at him and shared the image online alongside the caption “Spotted this specimen trying to dance the other week. He stopped when he saw us laughing.”

Looks like Sean’s getting the last laugh though because an awesome girl named Cassandra Fairbanks from LA clocked the photo and decided she’d do something nice for Sean aka the dancing man — provided she could find him. So she and her friends got to work on Twitter with the offer of a lifetime:

Anyone know this man or who posted this? There's a huge group of ladies in LA who would like to do something special pic.twitter.com/DGbu3AXOrB

Who knows this guy?? We want to throw him a huge dance party with tons of beautiful babes. pic.twitter.com/FJiCR8wTWo

#FindDancingMan Help us find this dude with the moves! Let's do this, ladies! pic.twitter.com/JvBIkpIxdi

Holy shit balls. Is there a man on the planet who would turn down that invitation? It wasn’t long before Sean revealed himself:

We are going to dance!!! pic.twitter.com/G7FxuiSsIh

I wanted to do something nice for him. I sent out a tweet and it spread like wildfire. Now w are keeping in touch as me and my lady cult, GNI (not actually a cult) plan an incredible party.

Big thanks to all who have tweeted such kind words. Not stopped smiling and laughing.

Have fun all and dance the weekend away !!! pic.twitter.com/vU0wnq21Sf

Nice one Internet — turns out you’re not all bad. Can’t wait to hear how Sean’s party goes down — no doubt we’ll bring you the details.

Of course, there are times you can ask for help on the Internet and have it completely backfire.