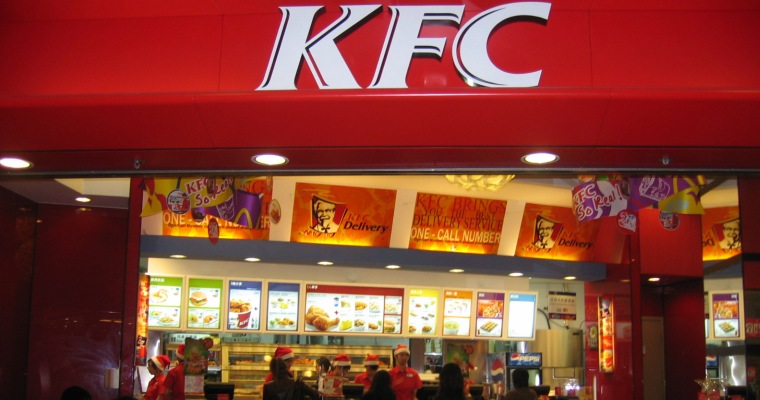 After a great deal of time allocated to discussing the merits of narcotics, felines and imbecilic celebrities, I felt it was time the Sick Chirpse mob ventured into the uncharted territory of culinary reviews (Little does Joe know, we actually used to do this in a semi regular feature called brap or crap, which sadly hasn’t been updated for a long time – ed.). And as the great food lover and socialite that I am, I decided it was up to me to organise a dinner soiree whilst evaluating a meal that I had seen advertised on bus stops across the length and breadth of the country: The Nacho stacker. The results, I found, were mind-blowing.

You can probably tell by my luscious way with syntax and lexicon that I am a man of higher pleasures. So when I, on a cheery saunter around my locale, noticed that an American burger outlet had fused together a food component that originates from the heart of Mexico (the almighty nacho) with that of their own, I knew that this was no ordinary dish. I contacted an acquaintance of mine straight away to discuss this matter.

It was amazing, the lady friend on the other end of the phone had seen the meal had been advertised on television and was just about to contact me about it too. We set a time and date, washed and ironed our respective dinner attire and slept well, knowing that tomorrow our banquet awaited.

The next morning, I sat in my armchair looking prim and proper as I anticipated my friend Charlotte’s call. It didn’t come. Half an hour passed and my belly was gargling at me. It knew very well my intentions.  So I rang and rang but to no avail. I could only assume the intoxicants she imbibed the night before had left her in a state of misty purgatory.  Eventually, though, I did the unthinkable: I rang the only person who was around at the time and he happened to be of the vegetarian sort. I begged and begged him to accompany me on my chicken-based excursion and he finally agreed with the stipulation that I had to go with him to a place that sold non-meats first. Watching the hungry vegetarian eat food was an ordeal that I had suffered many a time. His bony, iron-deprived hands held the cutlery in the limpest of ways but the boy ate like he’d never eaten before — a trait of many herbivores.  It was utterly disgusting to watch. It was like witnessing a slimy vortex hoovering up any non-meat in its wake. Luckily, I made it out alive and Charlotte got in touch and she headed to the high street with great velocity. 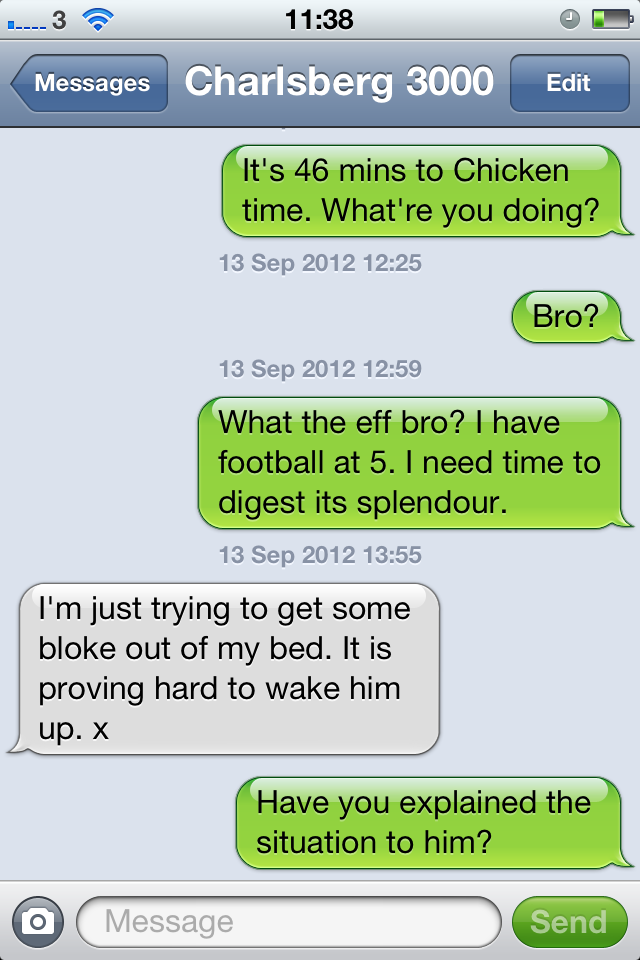 So there we were, Charlotte, Veggie-delight and I, staring in to the oblivion. The Colonel’s spectacle-adorned face shone in the midday sun, and he beckoned to me. I swung open the door before snarling, “Fvck fate in its fvcking face”. I didn’t know what I meant by that. I still don’t, but it felt right.

The establishment was abuzz with an interesting microcosm of society. Some had gone for the 3-piece, others had gone for the Fully Loaded meal. But I didn’t. I knew exactly what I wanted and I was about to get it, right in my face.

“One Nacho Stacker Meal kind sir”, I said to the cashier, my eyes flirting with his. The vegetarian sadly butted in, “You’re such a kid for eating in KFC, man”.

My face crumbled and I turned to him, “Go play Zelda or something. Asshole”. It was big boy time now.

I swiveled my head back to the KFC employee and requested some sauce.

“Two of every animal”, I replied. He didn’t seem to like this much. But I did. I certainly did.

I sat the tray down and looked down upon my feast. This is what I saw: 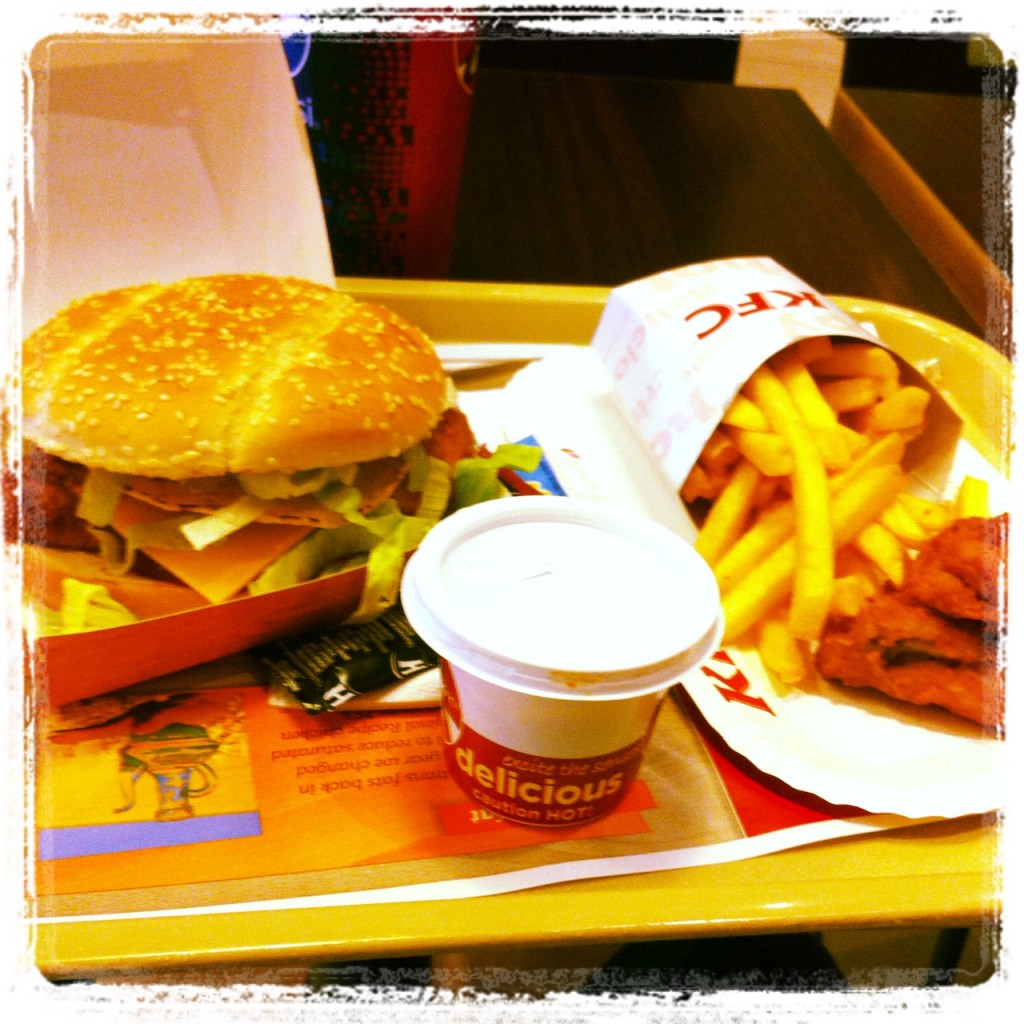 (Yeah, I Instagrammed a KFC meal. Look at me I’m Andy Warhol)

I picked up the weighty burger in my palm and stared at it for a few fleeting seconds. “So long pal”, I said and plunged it towards my patient mouth. The first bite: Wow. How can I summarise what was going on in my mouth with meagre words? The soft, egg-shelled coloured bun; the succulent hash brown, the sharp and fiery heat of the salsa; the crispy burger coating; the tender chickeny body of fillet; the mischievous slice of processed cheese that rested in the middle. This was no ordinary burger.  As the salty morsels entangled together in a courtship dance, I experienced a rare moment of epiphany and this seemed to play in my head:

Sadly, for Charlotte things weren’t as peachy.  In a fit of excitement she went in too hard on her burger and forgot to crunch up her nacho. This is very important for those about partake in this meal: by all means munch hard and munch fast but do NOT neglect the nacho. Charlotte found out the hard way and had to spend a good five minutes hocking it up in the disabled toilets. For anyone wondering, yes she is single at the moment. This is her only moments prior to the incident: 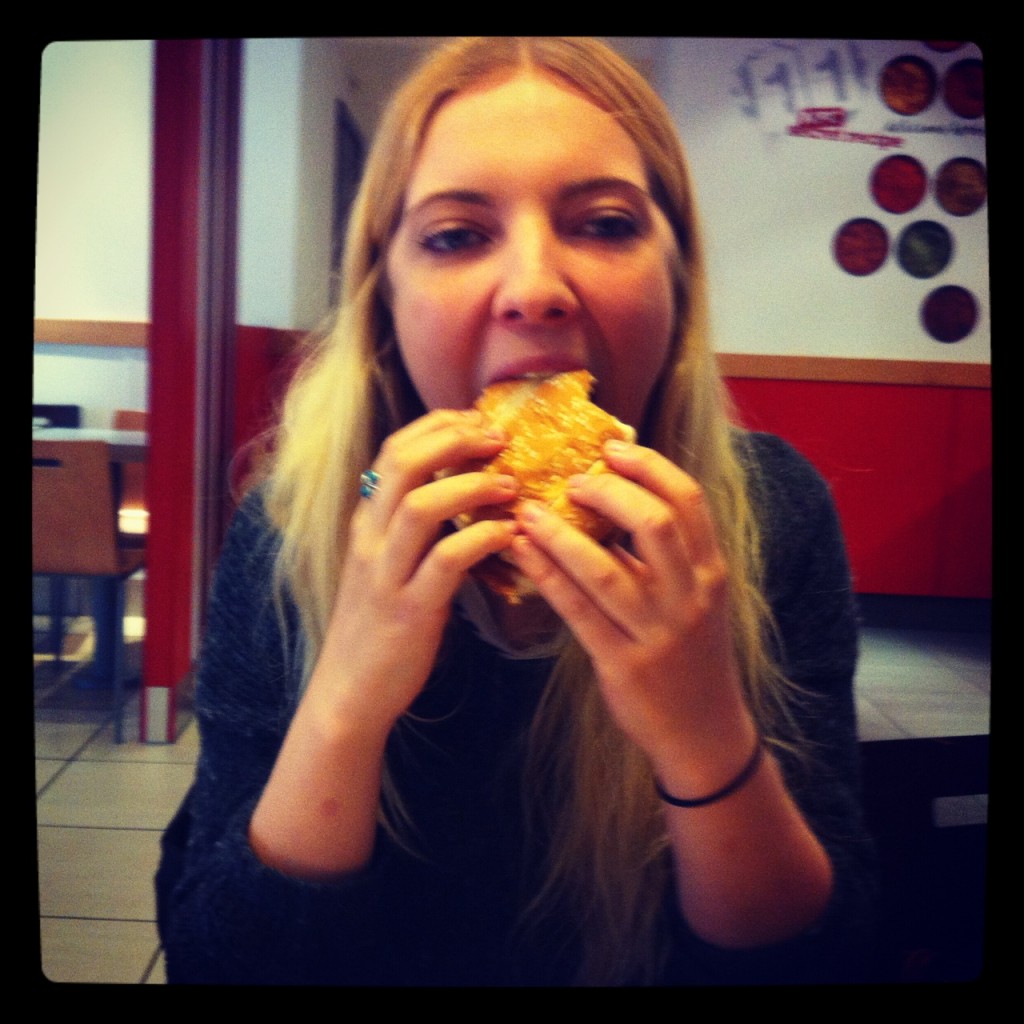 So, the Nacho Stacker: a meal that lives up to its promise (the promise being that it’s palatable).  Combined with a delicious 1-piece of the Colonel’s finest, chips and side of your choice (I chose beans), you won’t feel bereft of food when you finish. So head to your nearest outlet today but remember to heed my warning: the nacho element can be your best friend or your worst enemy.  That’s all from me for now, until next time. See ya!