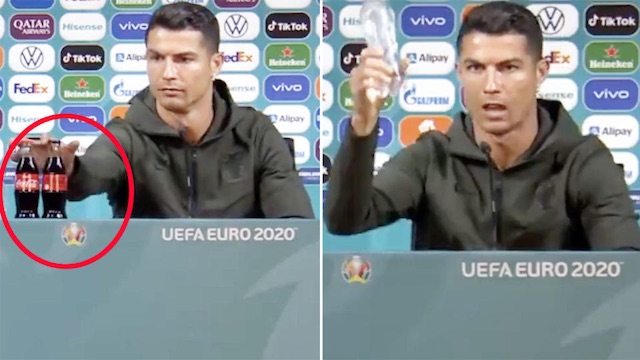 One of the funnier/more wholesome moments of the European Championships occurred the other day when Cristiano Ronaldo decided to move a couple of bottles of Coca Cola off screen during his press conference and replace them with bottles of water – it’s well known that Ronaldo is very serious about eating and living well – but I doubt anyone could have expected the disastrous impact this would have on the company’s market value.

Following Ronaldo’s actions, the Coca Cola share price fell from $56.10 to $55.22 which may not seem that significant but represents a fall of $4 billion. Ouch.

Coca Cola are one of the sponsors of the Euros so clearly weren’t too happy about the situation, although a Euros spokesman tried to iron it out by saying the following:

Players are offered water, alongside Coca-Cola and Coca-Cola Zero Sugar, on arrival at our press conferences.

Everyone is entitled to their drink preferences.

There are different ‘tastes and needs’ to cater for.

Sure. Coca Cola must be absolutely fuming about this, although the share price had slightly recovered to $55.44 yesterday. I guess a few people bought the dip hey, but that’s surely still over $3 billion wiped off the face of the company too. Probably gonna take a while for that to recover. Goddamn Ronaldo.

For more of the same, check out Manchester United’s sexiest fan trying to tempt Ronaldo back to the club. Just give him some water girl!