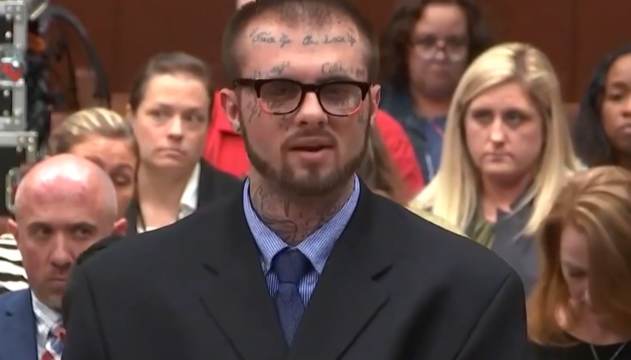 Congratulations, you played yourself.

I know it’s impossible to tell from just looking at him, but Christopher McNabb of Covington, Georgia, is one nasty piece of work.

Christopher and his girlfriend Cortney Bell were drug addicts in a volatile, violent relationship, who had just had a baby daughter – Caliyah McNabb. When that baby was just 15 days old, Christopher killed her with a crushing blow to the head and buried her in some woodland near his home.

The scumbag had already been found guilty and I guess didn’t realise he was at his own sentencing when he started to proclaim his innocence. The judge was having none of it however, and then set Christopher up beautifully for this unforgettable moment:

This is after his psychologist also testified in court that Chris had started wanking himself in front of her during one of their sessions, so sounds like this guy is screwed up in all sorts of ways, though I’m sure nothing he’s ever done comes close to the evil of murdering a two week old baby.

Fair play to the judge who was probably waiting his whole career for a moment like that, and couldn’t have dreamt of a worse person to be a part of it.

We’ve all heard what they do to baby killers in prison – can only imagine Chris is finding out first hand. No worries – only about 30+ more years to go.