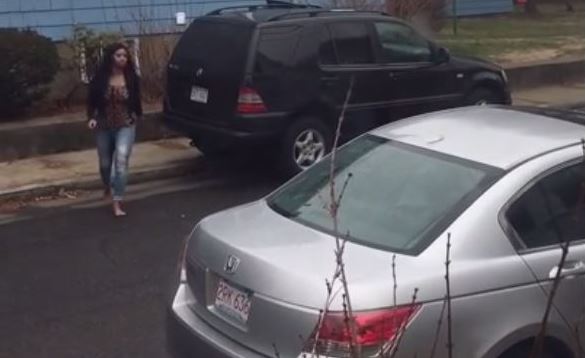 Fair to say this relationship is probably over now.

A rapper known as Young Wild shared this video earlier of his psychotic (and I assume now ex-) girlfriend trying to crush him between his own car and hers.

As if that wasn’t enough, the guy had minutes earlier been inside his house filming the damage she was doing to his car; keying the side of the vehicle and then smashing out one of the windows of his house. Check out the absolute insanity below:

I don’t know what he did to get Terri so angry but it must have been a monumental dick move. She is out of control. Let’s say it was something really awful though – I could maybe understand smashing one window in the heat of the moment, but trying to kill the guy? And how the hell is Young Wild so calm about it? She nearly ran him over and the guy’s just straight chilling and narrating the scene. Is your name Young Wild or what bro? Act like it!

Of course, since Young Wild is a rapper and this is the only video on what appears to be his rap group’s YouTube channel, not to mention the fact that it’s racked up almost 1.5 million views in 3 days, this could quite easily be a publicity stunt. I hope it’s a publicity stunt anyway, because that would do a lot for this guy’s life expectancy. It’s not looking great for Mr Wild at the moment, let’s be real.

This whole case isn’t too dissimilar from the time a woman smashed up her husbands car with a hammer whilst he filmed the proceedings, the only real difference is: there were no attempted murders that time.

Nevertheless, still worth a watch if you enjoy crazy exes and their heartless shenanigans.