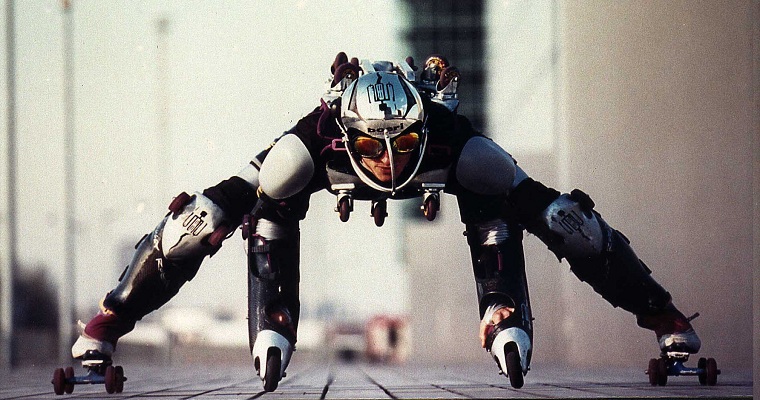 The Olympics may be round the corner but nothing can round a corner quite like the ‘Buggy Rollin’.

With the Olympics fast approaching, the world has gone a little sport mad. So French stuntman Jean Yves Blondeau picked an ideal time to break his record speed of 116km/ph rolling down Tianmen Mountain in a wheel embedded body suit, the complete nutjob.

Like a ground confined Iron Man, Blondeau maneuvered the suit, made up of knee-pads, arm-pads, a helmet and 34 wheels, around 99 sharp bends during the 6.5 mile downhill run in under 20 minutes.

Before I saw the footage I had no idea there was even such a thing as a ‘Buggy Rollin’, the name given to the human meets robot body suit. I thought, sure it doesn’t turn invisible, secrete ridiculously strong spider webs or burn through metal but this is the nearest thing to an actually comprehensible superhero costume I’ve ever seen. It’s apparently been around for some time though and has been used in a number of adverts and movies, the most recent being Yes Man which I’ve seen many times but must fail to process properly.

Invented by the stuntman himself as part of one hell of a graduation project at Industrial Design School Olivier De Selles in Paris, the ‘Buggy Rollin’ can enter speeds that skateboarding or roller-blading fail to provide the rush of. Wheels on the torso and the back mean that the wearer can skate what ever way they wish to, on their stomach, back, upright, backwards or forwards. It’s evolutionary to say the least, but slightly less practical than your average skate board. As far as im aware the wheeled suit isn’t available on Ebay yet so you may be waiting a while before you’re rollin’ to your local in this bad-boy.

Here’s a video of Jean Yves Blondeau using the Buggy Rollin’ to overtake a motorcycle in style.