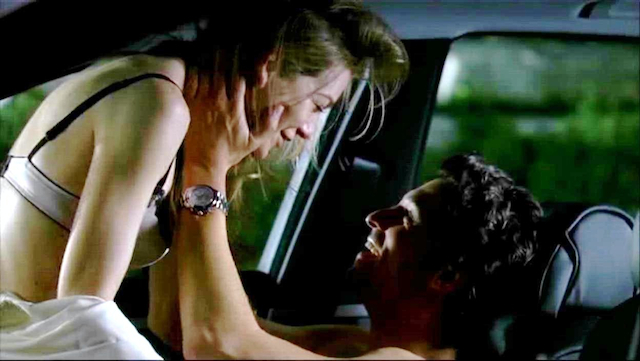 This is pretty much the definition of dangerous driving.

This video has gone viral and is exactly what it says it is in the title – a couple banging away on the motorway (highway?) as they’re driving along in the car. The woman is on top and she’s just bouncing away as the guy presumably tries to concentrate on servicing her as well as not crashing the car.

Almost as funny as this scene is the commentary from the people filming it who seem to be a husband and wife who are auditioning for commentating on a golf tournament or something equally as boring. It’s kind of funny because the wife is driving (sorry but that always cracks me up) and totally rinsing the guy filming, even though neither of them really raise their voices.

Firstly she’s all like ‘are you sure you got it? How can you be sure you got it?’ then after the guy agrees but says he wants to stop filming because it’s gross, she’s all like ‘what do you mean? Get another shot, I wanna see them bouncing again because you only got them flat.’ I guess we know who wears the pants in that relationship huh?

â˜› More Dangerous Driving: Man Banned From Driving For Being Under The Influence Of Drum N Bass