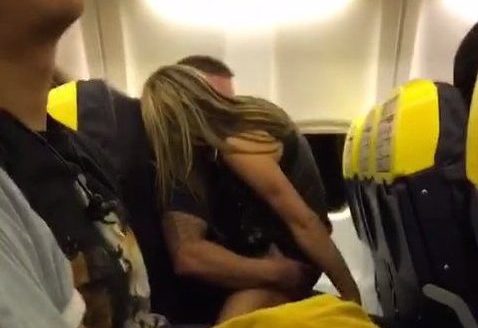 When it comes to flying with Ryanair, you know what you’re getting. The cabin crew is often rude and the baggage allowance is beyond a joke but in return you get to fly for absolute bargain prices.

Nevertheless, the incident that unfolded in this story might just have reached a new low for Ryanair. A loved up couple, who had probably enjoyed a few too many of the €5 beers, decided to openly join the mile high club by having sex mid-flight.

On the plane, which was headed for Ibiza, onlookers had to try and ignore the fact that the pair were grinding up on each other. Kieran Williams, 21, who filmed the incident, said:

We all laughed but then ten minutes later they actually did it. They seemed so drunk, they brought a lot of attention to themselves before they even started having sex.

You could see the girl taking off her pants and he pulled his trousers off. She started riding him. I had to get my phone out. I have never seen anything like that.

A woman was sat next to them and she stood up and asked if she could be moved. About twenty minutes after it happened, someone complained about it. But the crew did nothing.

Some people really have no shame. What they’re doing in the video is bad enough, but the fact that they went on to actually bone in front of all those people is just grimy. Get a room or if you’re that desperate/drunk, at least save it for the toilets.

Classic Ryanair though – I bet the staff avoided that aisle like the plague just so they didn’t have to deal with the problem. It was probably the same guys who let this dude get onto their flight using his girlfriend’s passport.