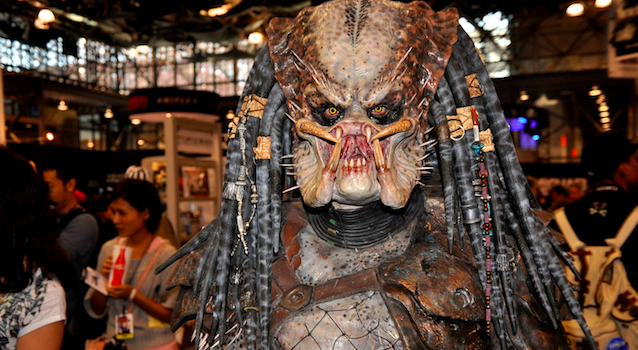 A street performer in Birmingham over the weekend was maliciously attacked on camera by a young thug. Take a look at the footage and help name and shame this jerk.

We all know that Birmingham probably isn’t the best city to live in  – which is why almost everyone I know has moved away – but this unprovoked malicious attack from a member of the public on an innocent cosplayer really is disgusting. Of course, it’s likely that stuff like this happens all over the world but the fact that this guy has filmed it and uploaded it onto his Facebook to brag about it really isn’t a good advertisement for Birmingham as a city however you look at it.

The video starts with this black dude called Vince walking around the Bullring when he then suddenly runs up to this street entertainer dressed as the Predator, who is standing on some kind of slightly raised platform – and pushes him in the back pretty hard so he falls straight off it onto his face and on top of a little kid who was watching him perform. Now, I think street performers are as annoying as the next guy, but pushing them over or attacking them simply because they’re slightly irritating isn’t really on.

As anyone knows, getting pushed in the back unexpectedly is pretty hard to deal with so it’s not surprising that this dude went flying, it’s just unfortunate that he landed on a kid but there wasn’t really anything he could do about it. Both of them were OK but that’s not really the point – the point is that this prick shouldn’t go around sneaking up on innocent street performers and attacking them.

As you’ll see in the video, there’s a campaign out to name and shame this guy, so if anyone knows anything about him then contact the guys in the video or leave a comment on here.