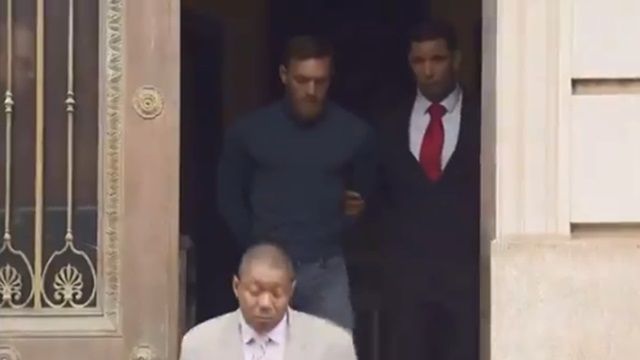 The whole internet went into meltdown yesterday after Conor McGregor broke into the UFC media event and threw a chair through the window of a UFC bus and it looks like he’ll be facing the repercussions of those actions for a very long time, starting today.

Conor handed himself into the police late last night and has been charged with three counts of assault and one of criminal mischief and is about to go and see a New York City judge to learn his fate. Of course, he had to get from the police station to the courthouse though and this meant that he had to be led out in handcuffs to the car waiting outside.

There was an inevitable ruckus, but Conor for once decided to stay out of it and just get to the car without any trouble:

JUST IN: #UFC star Conor McGregor walked out of police station in #NewYorkCity after backstage melee he allegedly instigated pic.twitter.com/h8MUGhJDKr

He doesn’t look like a happy bunny there does he?

Dana White has come out earlier today as well saying that Conor co-ordinated the whole attack on Khabib in retaliation for an altercation he had with his teammate Artem Loveb earlier this week. Apparently when Conor found out about it he flew 30 people over from Ireland so that they could attack his bus, which is just completely and utterly bizarre behaviour whatever way you look at it.

Following on from this, Max Holloway didn’t make weight so his championship fight against Khabib is off, with Anthony Petts apparently stepping up as his opponent. What a crazy week in MMA, and it’s probably only going to get crazier. Imagine if Conor got out of jail, made weight and then fought Khabib? I mean that probably isn’t going to happen, but just imagine eh? Stay tuned.

For more Conor Mcgregor, check out the footage of him trashing the buses here. Really is something else.