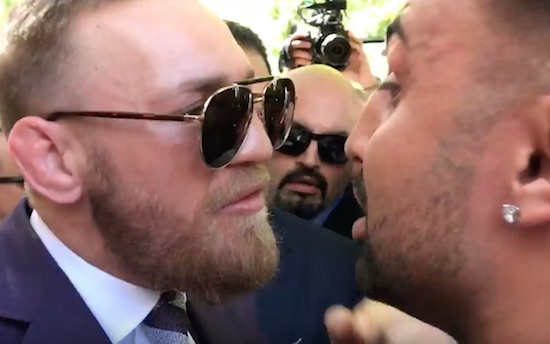 Paulie had to be dragged away by security.

Whilst all eyes are on Conor McGregor and Floyd Mayweather this week ahead of their super fight on Saturday, the intriguing subplot between Paulie Malignaggi and Conor refuses to go away.

In case you missed it, Malignaggi is a former champion boxer who was drafted in to help Conor practice with his sparring, but he got a bit upset when Conor released some photographs implying that he knocked him over during the session. Malignaggi vehemently denies this, but the footage has now been released which kind of supports it so it’s a bit of a weird one.

Anyway, Malignaggi is refusing to let this lie and now wants to fight Conor on St Patrick’s Day next year and is seemingly doing anything he can to try and secure this massive payday. This includes hassling Conor during his arrival at the Las Vegas media day yesterday.

The two got in each other’s faces and Malignaggi eventually had to be led away by security:

Geez, Malignaggi looks like he’s still legitimately angry about all this stuff – I’m not a boxer so I don’t know how upsetting those pictures getting released would be, but you might have thought that the guy would have calmed down a bit by now.

And to add to all this drama, previous to his confrontation with Malignaggi, Floyd Mayweather and Conor McGregor became involved in a backstage clash as well. The Arrivals ceremony had been a relatively restrained affair until the brawl involving both Mayweather and McGregor’s entourages, and as words were exchanged tempers grew to the point of pushing and shoving, although this was quickly diffused.

Save your energy for the fight guys – not long to go. For more hype surrounding the big fight this weekend, click here. So much to look forward to.