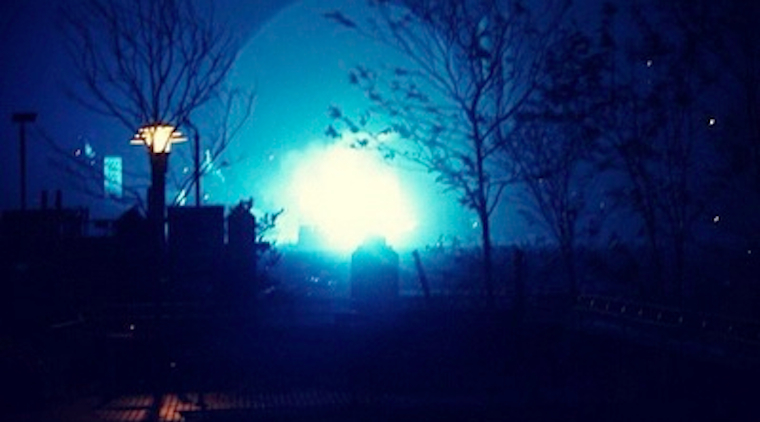 Hurricane Sandy fucked NYC up, mainly due to when it took out the ConEd power station which provides power to everything below 39th Street in Manhattan. Here’s a pretty awesome video of the explosion that took ConEd out of the game.

This video of a huge explosion was taken during Hurricane Sandy on Monday night and is pretty fvcking spectacular. There seems to be no debate that it was actually taken during Hurricane Sandy and isn’t a horrible fake like some of the photoshopped photos I posted yesterday because of the shitload of flooding going on in the video and the way the explosion actually seems kinda realistic, in that there’s a fire going for a while and then boom, massive white light and huge boom. It’s sick and I’m pretty certain it’s real life footage of the ConEd power plant explosion that left everything below 39th street in Manhattan without power on Monday night. I mean Gawker said it was, so it has to be right?

Apparently this is the explosion that left most of Manhattan without any power on Monday night but there are some people on the YouTube comments debating this and the location of the explosion. The uploader states that it’s ‘Footage of Con Ed explosion 14th street From NJ Water Front’ whereas a bunch of people in the comments reckon that the footage was taken in Brooklyn and probably in Williamsburg.

â˜› This Was Scary: Old WWII Bomb Detonated In Munich

Normally I would go with the uploader on their own video but you can clearly hear an English person speaking in the video and the fact that Williamsburg and Brooklyn is known for its hipster culture – and thus is clearly the most obvious place that an English person would end up when they were in New York City – I’m inclined to say that it’s from Williamsburg/Brooklyn.

It doesn’t really matter where the hell it was shot from though, the fact of the matter is that the explosion is awesome and the fact that it’s in the middle of a hurricane and all the roads are flooded makes it even more awesome. Check it out below, and then maybe check out these photographs of the devastation caused by Hurricane Sandy in New York City if you missed them yesterday: