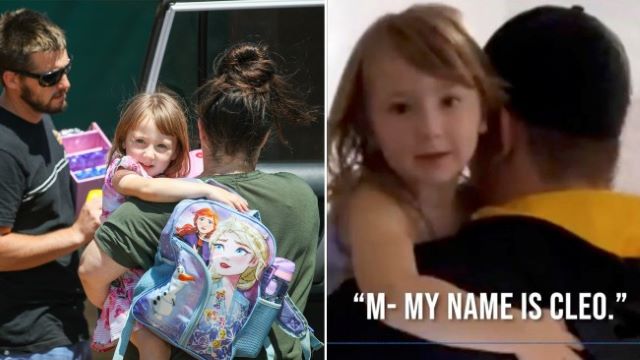 Aussie police have released a recording of the moment they broke into a house and found missing 4-year-old Cleo Smith sitting on the floor of a bedroom.

Extra video footage of the rescue:

The moment 4-year-old #CleoSmith was rescued. “One of the officers picked her up into his arms and asked her ‘What’s your name?’” The police commissioner said. “‘My name is Cleo,’ she said. This is the outcome we all hoped and prayed for.” #Miracle #Australia pic.twitter.com/f1Fn2d3QJ7

Cleo disappeared from her family’s tent at a campsite in Western Australia on October 16, triggering a massive search. She was found alone inside a room in a locked house two weeks later after police carried out a raid in the early hours of Wednesday morning. The house was about a six minutes’ drive away from Cleo’s family address in Carnarvon.

Here are the key points pertaining to the case and Cleo Smith’s kidnapper (via MailOnline):

The early-hours raid came after officers received a tip-off Tuesday night with ‘really important information about a car’, which they confirmed with phone data and ‘a lot of forensic leads’. Tuesday night’s tip was crucial in allowing detectives to finally track down Cleo.

Massive props to the Aussie police on a job well done. What a relief for Cleo’s family and anyone else who was following the story. According to Detective Sergeant Cameron Blaine, one of the officers who found her, Cleo was ‘alert and aware’ at the time she was rescued, and had been in the house alone playing with toys. He added that he had been to see Cleo since her rescue and she had been ‘bubbly and laughing’ and playing in her backyard.

We can only hope that this kidnapper didn’t cause her any serious harm, as unfortunately there are lots of things a child that young won’t be bothered about that come to haunt them as they get older and gain a better understanding. For now tough, it’s just great to hear this baby girl was found alive and well and is back the arms of her parents. Big up the Aussies!

To meet the missing Australian man who says he ‘survived on mushrooms’ for 18 days, click HERE.