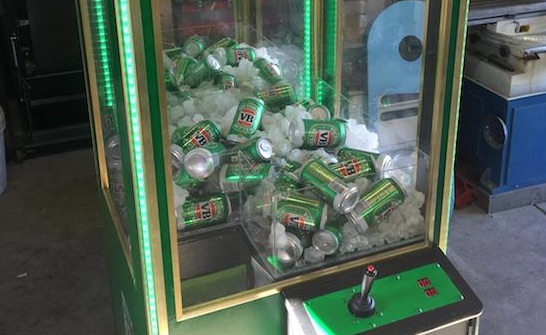 Every now and again, a new invention comes along that literally makes you stand up and think ‘why the hell hasn’t anyone come up with this sooner?’

This is one of those times. An Australian guy named Mark Herbert had a dream to create a claw machine that dispensed ice cold beers if you were skilful enough to grab them and he’s made it a reality as you can see in the video below.

I reckon this guy could become a millionaire selling this off to bars all over the world, because what wasted prick is going to see one of those and not think that he’ll be able to absolutely nail it and impress everyone in his immediate vicinity? A small minority of people, that’s who. Obviously because it’s in a bar and they’re completely hammered they’re going to fail every time and the machine is going to make an absolute killing.

Yeah OK, Mark Herbert gets it first time but he created it – I doubt anyone who isn’t an expert in claw machines would be able to do it so easily.

Herbert is a true perfectionist too, as he’s restructured the machine multiple times following criticism to make it the ultimate beer can claw machine – here’s what he had to say about it:

I had thousands of positive comments on previous VB skill tester video, but there were a few negative comments about not being full cans, not cold and they would fizz up! I am up for the challenge. The final design has waterproof acrylic tank to hold ice, motion sensor that sets of 4 different VB tunes once you’re within 1/2 metre of the machine, and soft padding for the can to land on. Cheers!

Fair play to the guy. For an invention that isn’t so hot, check out audiopill – it’s a pill that transmits drum and bass music through your body. Seriously.