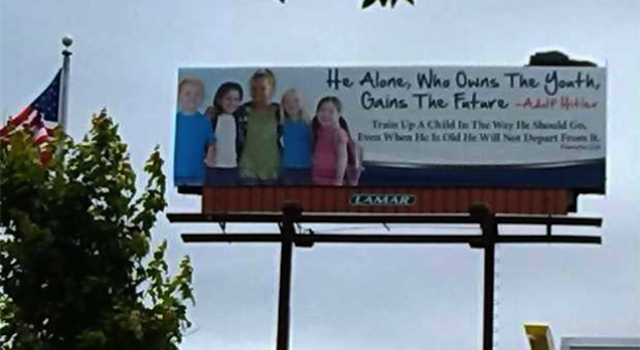 Chalk this one up as one of the biggest faux pas in history.

When will people learn that it’s just not a good idea to quote Adolf Hitler on your church billboard, even if what he was saying actually made a lot of sense? It seems like the answer is not any time soon.

Life Savers Ministries, which is based in Opielka, Alabama (which sounds like a small shitty town that I haven’t heard of either) decided that it would be a good idea to quote the Fuhrer on their billboard because he had great success with inspiring and recruiting the young people of Germany. Hmmmm.

The quote that they picked was ‘He alone, who owns the youth, gains the future’ and this was featured prominently on the billboard alongside a picture of five children. They also thought that for some reason it would be a good idea to ascribe the quote to Hitler on the billboard and in a pretty large font, which I really can’t understand at all. Whoever is in charge of their PR team really needs to get fired immediately.

It gets even worse though, if that’s even possible. The quote sits above the well known quote from the Bible: ‘Train up a child in the way he should go; even when he is old he will not depart from it.’ Now, I wouldn’t count myself as especially religious, but you would have thought that surely someone from Life Savers Ministries must have thought that putting quotes from the Bible and Adolf fucking Hitler on the same billboard wasn’t a good idea, right, for about a million and one reasons?

You would think that, wouldn’t you? But no, they let it happen on Friday and saw the number of applications to their ministry soar by Saturday. No, that’s a lie of course – it was complained about almost immediately and taken down on Tuesday. It’s now filed under eternal damnation at the head office and at least one member of the congregation has rubber stamped their place in hell because of it. See you there buddy.

This place probably belongs to founder James Anderegg, who offered the following explanation for the incident: ‘We are pulling the billboard and certainly never intended to cause confusion. … Herbert Hoover would have been a far better one to quote when he said, ‘Children are our most valuable resource’. We are a children’s organization and had honorable intentions and nothing less.’

Cool, glad he cleared that up. I’m sure everyone in Alabama (which is almost certainly a really religious state anyway) will be sending their kids to his Ministry now after that reasoning. It’s almost as succinct as the thought process the guy must have had to put the billboard up in the first place.