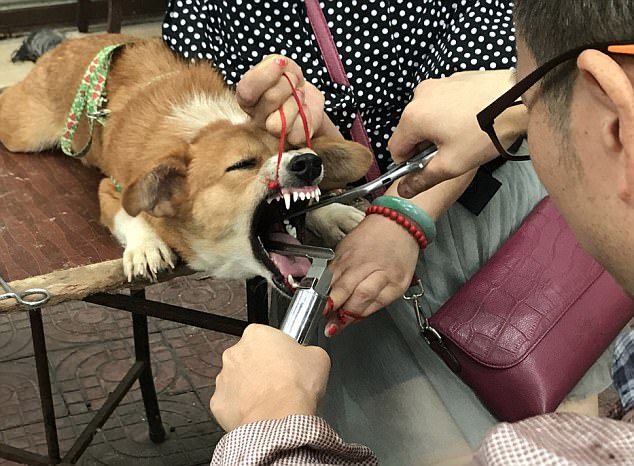 It’s well known that the Chinese don’t exactly treat dogs with the love and attention that they deserve, but this next story is really taking things to the next level.

Reports are emerging (alongside a particularly gross video you can see below) from south west China that a vet there is removing the vocal cords from dogs in order to stop them barking because their owners were so annoyed by it. As if this wasn’t horrific enough, the doctor is also performing the operations on the street without the aid of anaesthetic.

What an absolute scumbag. Apparently the vet – who is known as Zeng – has been running the ‘service’ at a flower and bird market in Qingbaijiang district of Chengdu since September 14. He charges between £5 and £11 depending on the size of the dog. The operation involves a thong, a torch, cotton wool balls and tourniquets.

Zeng’s assistant would open the dogs mouth with the help of two red strings and a thong, whilst Zeng would go in there and pull them out, throwing them on the floor. Dog owners allegedly bought their pets to him because people would complain about how loud they were barking in the street at night.

Take a look at the gross video below:

Ugh. You’ll be pleased to know though that Zeng has been stopped from operating thanks the fact that he was unable to present a valid business operating licence when confronted by officers from the Qingbaijiang Forestry Bureau.

As Zeng wasn’t sterilising his equipment at all – despite the fact he was sometimes operating on up to 10 dogs an hour – it seems unlikely that he will be granted one as his service doesn’t meet the required standards of an animal clinic. That’s good.

The worst thing about this whole story though is that devocalisation of dogs is a fairly common practice in China and many families take their animals to undergo the surgery to stop them from barking so much. These guys were just taking the cheaper option, go figure.

Still not convinced that the Chinese treat dogs like absolute garbage? Check out the Chinese dog meat festival and try and tell me that again.