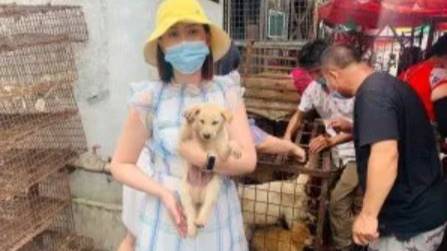 Following the worldwide condemnation of their wet markets after the Coronavirus pandemic, it was thought that some progress had been made when the Chinese announced that dog meat would no longer be sold and the animals would be reclassified as pets.

Unfortunately, it doesn’t really seem like these new rules are being taken seriously in the run up to Yulin’s annual dog meat festival as the video you can see below shows ten live dogs being rescued from a market in the city in the last couple of days:

Gross. Although I suppose you have to commend them for tracking down this practice and putting a stop to it.

Dr Peter Li, China policy specialist for Humane Society International, suggests that this is indicative of a shift in culture in the country too:

The Yulin authorities may want to keep a closer eye on all the dog meat trade activity by centralising it more or less at one market, possibly because of the increasingly controversial nature of the dog meat business.

While some traders told the activists they were doing as much business as possible to make up for lack of sales from January to March due to the coronavirus, others reported that it is now harder to acquire live dogs from outside Guangxi province due to the government’s crackdown on trans-provincial animal transport.

Instead of the huge slaughter trucks of previous years bringing in thousands of dogs at a time, they say it is more common now to see small truckloads of mostly locally sourced dogs from nearby towns.

Momentum is building in China to tackle the dog and cat meat trades, and while I don’t think anyone expects Yulin’s dog meat trade to close up overnight, what the activists witnessed could indicate that things are shifting even in Yulin.

The cities of Shenzhen and Zhuhai have hopefully started a trend by banning dog and cat meat, and the declaration by the national government that dogs are considered companions rather than livestock, provides a compelling incentive for other cities to follow suit.

I do hope Yulin will change not only for the sake of the animals, but also for the health and safety of its people. With new cases of Covid-19 tied to a Beijing market, allowing mass gatherings to trade in and consume dog meat in crowded markets and restaurants in the name of a festival poses a significant public health risk.

I mean that does sound promising doesn’t it? I know it’s difficult for the government to uphold new laws in every single part of their massive country – especially when they’re attempting to eliminate an ancient practice as old as the culture itself –  but I suppose you have to give them some props for even attempting to do this and shutting down this wet market in the video itself fairly quickly. Can only hope that this is the beginning of the end of the practice.

For more of the same, check out North Korea claiming that dog meat is a superfood. There’s always one.