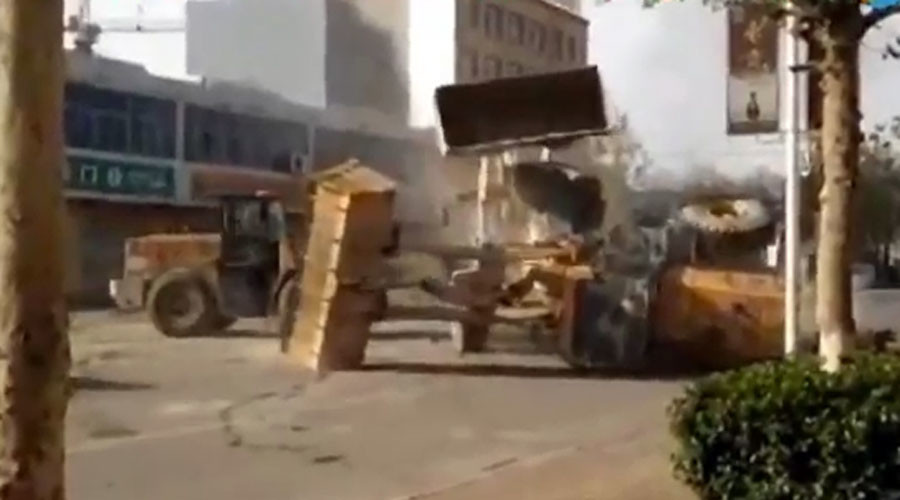 It looks like there was only one way to settle this.

Over in China, the construction sector has fallen on hard times with growth down to two thirds what it was at the peak of the industry ten years ago.

As such, you now get scenes like those in the video below happening all over the country as the ripples from the slow down of the construction industry are felt throughout the industrial sector. In what must surely be one of the most ridiculous videos we’ve ever featured, two rival construction companies are actually so mad at each other over losing contracts that they see no better way to settle their differences than by heading out into the streets in their bulldozers and trying to tip each other over.

Whilst this might be a dream scenario for someone who is about three years old, the actual reality of it is a lot scarier as there are a shitload of bulldozers ramming into each other and a couple even get flipped over. You do see one dude managing to escape as he crawls out of the tipped over bulldozer, but we can only hope that everyone else is OK. I just can’t believe that so many grown men would actually think that this was a good idea or a realistic way to settle a dispute or solve a problem?

Geez, it’s kind of like a cross between a demolition derby and Transformers right? It’s nuts that they’re just going at it like this on the city street. I really can’t get over the fact that it actually happened. But yeah, it did and it doesn’t seem like it achieved anything, unless they’re hoping to make lost money up from the video going viral. That’s not actually that bad an idea.

For more of the same, here’s the most horrific car accident you’ll ever see.