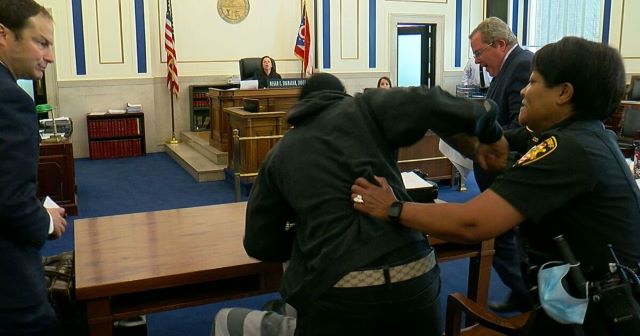 The title doesn’t actually do the story justice – suspect DeSean Brown is accused of killing the wife and 3-year-old child of devastated father Antonio Hughes in Hamilton Country, Ohio, stabbing the former and throwing the latter into the Ohio River.

In court this week, Hughes spotted an opening to exact some measure of revenge on the man who killed his wife and kid, and took it as best he could:

Unfortunately, as you just saw, police get in the way and Hughes isn’t able to administer as much damage as he would like. Couldn’t they just have moved a little bit slower and let him get a few more licks in before restraining him? I don’t think many people would hold it against them.

Hughes was charged with contempt of court over the incident and has been ordered to serve a week behind bars. I know these guys are ‘doing their job’ or whatever but come on, sometimes you just need to let justice take its course. Here’s a couple more examples:

To watch a psychotic nut job give one of the most disturbing court room performances in history during his murder trial, click HERE.