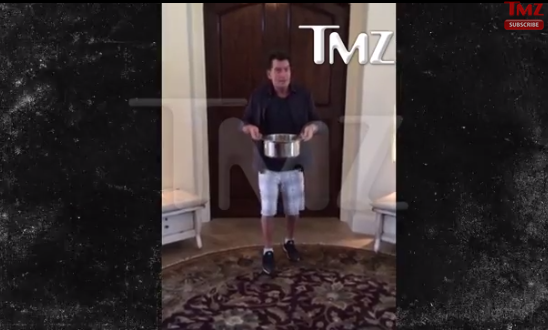 If you’ve been on the internet in the past week or so then you will have inevitably seen videos of people throwing buckets of ice over each other and then nominating someone else to do it, in the next big internet meme following in the footsteps of the no makeup selfie and #NekNominate.

Usually, this is the kind of stuff we would be showing on Sick Chirpse but we’ve actually managed to steer ourselves away from it because it’s not actually that funny seeing a celebrity get a bucket of water thrown over them, and even less funny if you see it happening about 20 times a day. It’s even dumber if you don’t even know what they’re doing it in aid of (in case you didn’t know it’s for the ALS Association which researches Lou Gehrig’s disease).

However, that had to change today when Charlie Sheen – who is apparently still a celebrity despite not really having done anything since he was fired for Two And A Half Men and pretty much had a mental breakdown – completely turned the challenge on its head, and actually did something way cooler and way more worthwhile than everyone else who has got involved with it. He even gets in a dig at his old enemies on Two And A Half Men.

I’ll let you watch it yourself as it’s way better without spoilers. Definitely still #winning.