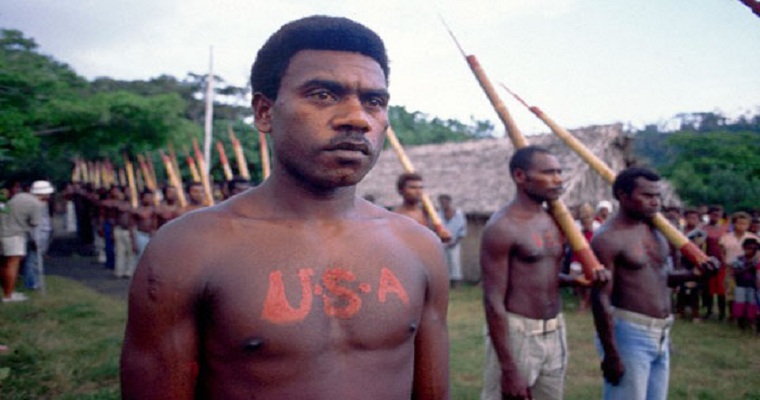 Cargo Cults are some of the newest and strangest religions in the world. Fascinating and worrying all in one mouthful….

Imagine you are living within a tribe on a remote island and you’ve never seen a white guy, never seen anyone wearing western clothes, never seen a cigarette, never been to Argos, never seen any documentaries about Jordan or Katie Price and a KFC Zinger Burger has never so much as brushed your lips. You live in a forest village, you kill animals for food and you make whatever you need from whatever is lying around. Are you picturing it? Good.

Now imagine that one sunny day, some whiter than white American chaps turn up on your shores in boats. Huge metal buggers. Wearing uniforms made of exquisite fabrics emblazoned with shiny badges. They have food in tins, glimmering rods that fire death pellets over 100 paces and they seem to be able to communicate with massive metal birds that appear from nowhere and contain food and people in their ample bellies. Surprised would be an under statement. This is exactly what happened to many tribes in New Guinea, Melanesia and Polynesia, particularly during and just after World War II. Japanese and American troops set up bases on these tiny little outposts. Once the war had finally buggered off, so did these foreign wizards and with them their supply of magic. The inhabitants were gutted/ bemused.

So how does a feeble human brain readjust to fit in all of this new and unexpected shizzle? Well, simply put, it’s all assigned to a higher power – The ultimate solution for confusion in the uneducated human. The inhabitants decided to try and get back to the glory days by inventing odd cults and new rituals. Some of these Cargo Cults still remain to this day, including one in Tanna (a remote island) where more than half a century on, they continue with their unsuccessful rituals. They try their best to mimic the soldier’s activities in a hope that they too can summon the same wealth and technology that those mystical foreigners had managed to steal. They build ceremonial runways in the jungle, make radios from coconuts, rifles from sticks (see picture at top), planes from wood and wear white T-shirts that say “T-A USA” (Tanna Army USA). Some believe that Jesus will return wearing camo and driving a jeep. 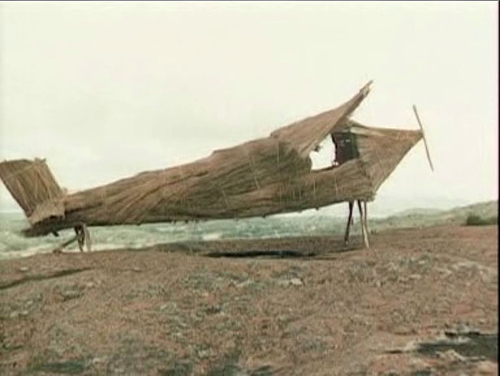 The wonderful  Prince Philip Movement on the island of Tanna, worships Prince Philip as the name suggests. Philip proved that he’s a good egg and on their request sent them a picture of himself holding a traditional pig-killing club. They reckon old Princey is the pale-skinned son of a mountain spirit and brother of John Frum, who is some mysterious western guy that is also worshipped on the island. No one is too sure where the John Frum character originated, some say he’s white, some black; However, they all agree that he is their Lord and God and will return to them on February 15th, one year, some time, as long as they reject all western ways. They still have a big John Frum parade on that day every year in the false hope of his big come back. No joy so far though.

If nothing else I think this majestically demonstrates how all of us humans are frighteningly good at believing utter tosh for decades, with no kind of basis in fact at all, even when something’s repeatedly proven to be wrong. We are all guilty. Hang the Homeopath. Slaughter the Psychic. Bring on the Apocalypse. 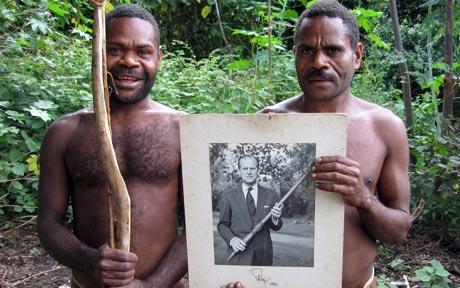