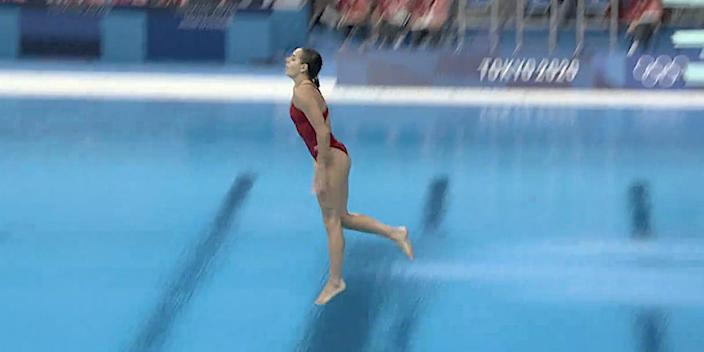 It has to be the absolute worst feeling in the world to train for four years for the Olympics and then screw up your chance really badly, but unfortunately this is the reality for some athletes out there.

The latest of these is Canadian diver Pamela Ware, who messed up the timing of her dive on the three metre springboard and ended up landing feet first in the water. The judges scored her a 0.0 and this meant that she was heading home in 18th place.

This isn’t the first time this has happened in the competition either, as Mexico’s Arantxa Chávez made an almost identical error just 24 hours earlier in the preliminary rounds, although this meant that she finished 27th in the field – also last place – and went home even earlier. You can check out footage of both of them below:

Geez. That must be a major bummer for them, but apparently it’s quite common in diving and is the equivalent of Simone Biles’ case of the ‘twisties’ in gymnastics, where competitors just lose awareness of where they are during their run in relation to the ground and spin out. Ware said it would have been extremely dangerous if she had followed through with the dive having experience this, so it’s definitely for the better that she got out.

Thankfully, Ware has put up the following Instagram post where she seems to be dealing fairly well with her mistake and vows to come back stronger:

What we do in the competition is just a tiny factor of what we actually do to get to where we are.

I was so ready for this competition, and I made a mistake. It could have happened to anybody, but it happened to me at the wrong time.

But I am proud because I have done everything possible to make to make it where I am.

I hope you guys get used to having me around because I’m not going anywhere, and this competition does not define me and I’m not letting it defeat me.

That’s great isn’t it? Canadians are notoriously positive people so that probably helped, but hopefully we can see a more sympathetic attitude towards athletes when stuff like this happens in the future rather than everyone just laughing at them all the time. They’re way better than us sitting at home on our couches in any case.

For more of the same, check out these faces of Olympic divers. Absolutely mesmerising.