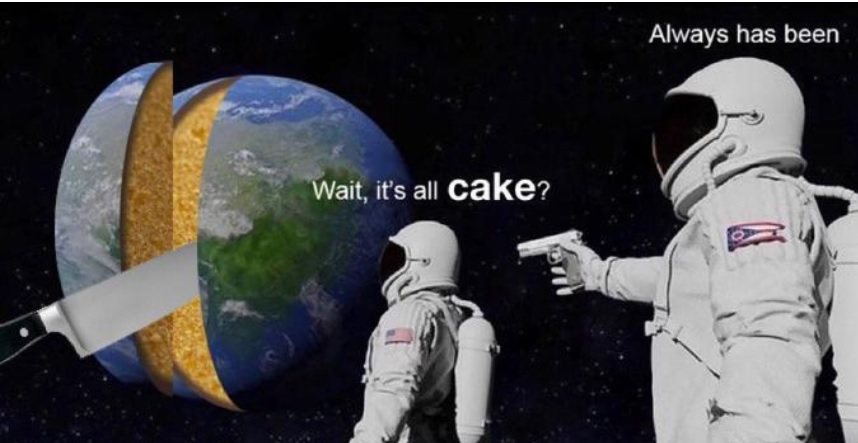 Busy weekend on the internet.

Not sure how you spent your weekend, but a whole bunch of people decided to use it to make memes about cakes after a disturbing video of people cutting up various animals, people and objects to reveal that they were actually cakes went viral.

The video was first shared by one of Buzzfeed’s verticals ‘Tasty’ and is currently sitting at around 28 million views, although there are a bunch of other similar clips out there doing the rounds off the back of it. Trust me though, when you’re watching them you’re gonna be pretty damn surprised that they’re actually cakes when that knife cuts into them.

Take a look below and see what you’re thinking:

These Are All Cakes pic.twitter.com/ejArkJHaid

In my world you can never be sure what’s what! 😎

I mean that is kinda messed up and freaky right? As is so often the case these days, the popularity of these videos has caused everyone to question whether everything in the world is actually made of cake and obviously articulate these thoughts through the mediums of  memes and tweets. Here are a few of the best ones:

Me proving to my friends that I’m not cake even though they never asked me to pic.twitter.com/M0P4uphzDQ

“…your honor i didn’t mean to stab him i thought he was cake” pic.twitter.com/bjy4TClUDx

Horrified to find that Helen, my wife of thirty years, is a cake. The ranch-style home where we raised three wonderful sons? Also a cake. Randall Jr., Vincent, and Cody? Cakes. The life we built, cake. My gaze drifts to the knife block on the counter. Could it be? Could *I* be?

this website requires so much lore to navigate if u missed a day this would make no sense to u at all https://t.co/0FVL8p6VQk

this website requires so much lore to navigate if u missed a day this would make no sense to u at all https://t.co/0FVL8p6VQk

anakin was just checking to see if the younglings were cake pic.twitter.com/6TpYo7cdke

“R u cake yes or no” pic.twitter.com/CrEcyRznUF

hear me out what if the knife turns things into cake

Weird weekend on the internet hey? Sure this meme will probably be forgotten in about a week or so but expect to see it everywhere up until then. I think there’s a lot more that can be done with it to be fair.

For more of the same, check out these 17 horrifying cakes that should be illegal. Seriously.